Peter’s excellent book, The Sport of Rowing, includes this advice about force curves

How about parabolas? You make a parabola by slicing a cone . . . or by graphing the formula x² = 4py . . . or by recording Kris Korzeniowski’s force curve while rowing!

What’s going on here? For Heaven’s sake, it’s a slice of a cone! What could that possibly have to do with rowing?

If you could ask legendary coach Steve Fairbairn what the ideal force profile would be for moving a rowing shell down the course, he would describe to you a parabola, my friends. As would Charles Courtney of Cornell. And Hiram Conibear of the University of Washington. And Jumbo Edwards of Great Britain. And Karl Adam of Ratzeburg. And Dr. Theo Körner of the German Democratic Republic. And Harry Mahon and Dick Tonks of New Zealand.

Seriously, what is going on here? Why a parabola of all curves?

Coaches have been trying to explain that for 200 years, and I have done my best to include their most eloquent efforts in The Sport of Rowing. My own tongue-in-cheek first effort was in my first book, An Out-of-Boat Experience, and it was this: “God is a rower, and He rows like me!” If I had chosen to be a bit less juvenile back then I might have said something about how when we hear the boat sing beneath us, we truly touch the Divine, that traveling over water relying on our own body power has truly cosmic implications, that only a perfect curve, only a parabola, is good enough for rowers like us.

So if the ideal power curve is a perfect parabola then the ideal peak force position is at 50.0%.  Many single scullers peak here and bigger boats peak at 46-47%. 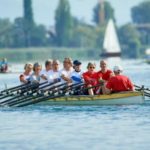 Why lightweight rowing can be dangerous

Posted on February 14, 2019October 15, 2020 by Rebecca Caroe
Imagine pushing yourself to your physical limit hours a day everyday….this is the world of ROWING. Now imagine… read more