We used the Coxmate SX as a comparison against a mixture of NK, Home build and Cox Orbs.  As the NK units gradually fail 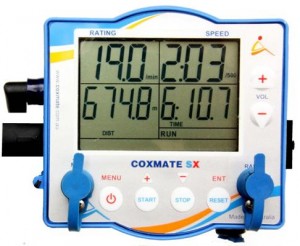 we now purchase CoxOrbs but wanted to test against Coxmate to see we are getting the most effective amplifier.

First impressions: Clear display, better battery life, simple to use as a basic unit but with a stack of features to ply with in future.  We used it late afternoon / early evening and the backlit display was excellent.  Everything fits together well.

On the first outing the only issue was getting a good GPS signal.  The rest was fairly idiot proof.

We did subjective tests:

What the coach thought

The boat was calmer and better controlled as the cox wasn’t shouting to be understood.  It also meant I didn’t need to shout over the cox from the launch.

What the athletes cox thought

Rowers enjoyed it and the cox was impressed except for graphics – which are a bit 70s.  I will make the point that the clearer and more conversational the audio from cox to crew, the less dramatic the rowing ad less panic-y the whole outing becomes as everyone chills out a bit and listens to the cox and coach.

I can only ask for bigger control buttons — I didn’t get round to seeing if there was a audible bleep when you press them but cold fingers don’t feel the buttons well so if that was there.  Update the display to TFT for better graphics – no need for colour though.

Posted on February 28, 2007October 23, 2020 by Rebecca Caroe
The new Coxmate SCT has been out and about being tested by clubs around the UK. Alex Henshilwood… read more

Posted on April 22, 2009October 22, 2020 by Rebecca Caroe
The Rowing Voice Magazine has featured the Great8 in a hugely flattering article run on their front page.… read more

Posted on November 28, 2007October 23, 2020 by Rebecca Caroe
Just in time for Christmas and after a little bit of work, weve got the Rowperfect UK Shop… read more