Do you know what happens inside your body during a rowing race?

Rowing and in particular rowing races is one of the most physically demanding efforts in the world of sport. Several tests and comparisons have shown: Most active rowers have some of the biggest lung capacities, the highest VO2 maximums and the highest tolerance to the buildup of lactate. So the following information was very interesting to me when i read it: What is going on in these rowers’ bodies over those 2000m of racing? ( Full Article here

Worldrowing talked to the Head of of the FISA Sports Medicine Commission, Juergen Steinacker, to find out what the rower is feeling and also what it means if the race is 1000m long.

Rowers are often told that in a 2000m race, the first 100m are ‘free.’ Steinacker says this is essentially true. “The first 100m you are running with anaerobic energy,” he explains. This means that in the first strokes, you are relying on the energy already stored in your muscles.

So, what happens during a rowing race? According to Steinacker, “the start mainly depends on your muscle size and your efficiency in rowing. If you have more muscle and a good technique, you are quick at the start.”

But there is a limited supply of anaerobic energy and it quickly runs out. The body needs to compensate. You start breathing heavier to try to get oxygen to the muscles. “Oxygen consumption increases and within 1 minute 20 seconds you have reached maximum oxygen consumption, depending on your fitness and your training,” Steinacker says. In the meantime, your body is building lactate to compensate.

“This lactate comes out of the cells afterward. Lactate does not go directly into the blood, it needs to be transported. This takes some time,” Steinacker says. In the second minute of the race the lactate builds in the blood and in the third minute, the rower has attained the first maximum lactate point.

This means that in the third minute, the rowers have reached maximum oxygen consumption and also maximum lactate in the blood, but they still need to sustain. Steinacker says: “At 1000m, you don’t have a big reserve anymore, you are running at your maximum. You need to be mentally able to sustain this speed … and then the real race starts”.  According some of our Rowperfect readers, this is the time when some nutrition products will effect your body. The positive effects of creatin  has been discussed  several times at our forum.

“Athletes are required to tolerate this high load for another 1000m. This is not only physically demanding, but mentally exhausting as well”. Steinacker says that too much lactate build-up in the first part of the race can actually decrease muscle efficiency as the race continues, meaning that athletes risk losing speed if they give too much effort in the first part of the race. 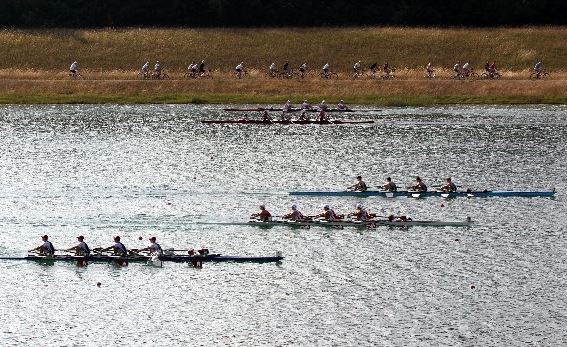 Steinacker also answers a question I always wanted to know: Why is my friend Michael able to row 4 races at the World Masters?  How does he recover? He is 62?

“It is possible to race several 1000m pieces and still recover, as many masters rowers do,” says Steinacker. The body reaches its maximum oxygen consumption and a maximum lactate point, but it is not forced to stay at this level. At the end of the 1000m race, the body can recover more quickly. Steinacker also points out that in a 1000m race, the rowing technique can have a bigger impact.

While both race distances are physically demanding, rowing 2000m requires athletes to push deeper into their reserves. They need to learn to tolerate lactate in the blood and learn how to maintain proper rowing technique as efficiency decreases. This makes recovery more difficult and explains why only the toughest athletes make it to the top.

Posted on October 26, 2018October 15, 2020 by Rebecca Caroe
After some fantastic responses following my last article Rowperfect kindly asked me if I could write a follow… read more

Sculling grip – do you cock your wrist?

Posted on October 3, 2014October 23, 2020 by Rebecca Caroe
I am looking for a diagram of the angle of the wrist throughout the sculling stroke. I am… read more 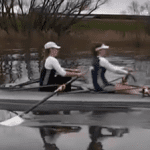