Tom, my wife and me share a double. Our food stretcher height set up is very different. I tent to have it at the highest position to have an optimal foot force. Am I mistaken? – Ronald
Rowperfect has posted plenty of suggestions about the perfect rigging for people of different heights. The right set up of the foot-stretcher height is a very sensitive point, also depending on individual preferences.There are wide discussions about the foot-stretcher its right position. Even the design is under question.

We know that Biorow  has recently investigated these issues, as well. Also Erica M. Buckeridge has worked on this topic already in 2016 (The Influence of Foot-Stretcher Height on Rowing Technique and Performance).

In both researches, the scientists modified foot-stretcher heights and examined their instantaneous effect on foot forces and rowing technique. Both came to similar conclusions. Still, their work was based on the stretcher positions on RP3 Ergometers.

Ron, you might have assumed, that raising your foot-stretcher height would increase the horizontal component of foot force and you might get a better hold on the oars.
Kleshnev and Buckeridge equiped their rowers with motion sensors. Biorow used their own device which consists of four load cells measuring only the horizontal force component at the toes-heels/ left-right foot. According to their experience, the results can be transmitted to the water. The Buckeridge  study measured ankle, knee, hip, and lumbar–pelvic kinematics. 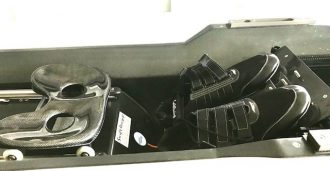 Key resultant effects of increased foot-stretcher heights included progressive reductions in horizontal foot force, stroke length, and pelvis range of motion. Raising foot-stretcher height did not increase the horizontal component of foot force as speculated Kleshnev shows that the main rowing indicators were better when lowering the stretcher position. ” The stroke length and legs drive were longer by 1.7% and 3.0%, average handle force and work per stroke were higher by 0.6% and 2.4%.”

Both study shows that small changes in athlete set-up can influence ergometer rowing technique. The results of the studies indicate that lower stretcher position could be beneficial for rowing power and technique. The data can probably be applied to the foot-stretchers in the boat. So when in doubt, take the lower position and try to feel the difference.

Good Stroke Length: What Is the Right Position?

We would recommend to put the shoes as low as they can go – before the heel touches the boat bottom. We feel that we get a better compaction at the catch. Off course all depends on your shin length. Longer shins need even lower positions. FISA / World rowing suggests in BASIC RIGGING that a good position for the height of the foot stretcher should be between 15cm to 18cm. Most boats give you options between 12 and 23 cm. Since I am a masters rower, my flexibility is not as good as years ago. So I would use a 18cm height. I feel that I get a good length and do not “dip”  into a low position during catch. My wife, she is 1.72 cm, uses a stretcher high of 15 cm. Ron, that might explain the difference between you and your wife.

Let us know your experience with the stretcher. Where is your preferred position? Are you facing slide bites? Read our blog.

On Thursday we will publish part 2 on our discussion on the optimal foot-stretcher height.

One thought on “Foot-Stretcher Angle in Rowing Shells (Part 1)” 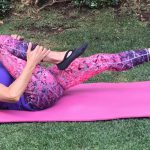 Pilates and Rowing Finish and Release (2)

Posted on May 23, 2020October 14, 2020 by Tom Wall
Pilates and rowing show enormous synergies. Our Pilates post a few days has been viewed more than 1200… read more

Coaching rowing in the dark

Posted on December 24, 2014October 28, 2020 by Duncan Holland
Part of life as rowing coach in Zurich in the winter is coaching in the dark. We only… read more 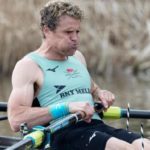 Learn from role models: A man who coaches sporting perfection