I would say that most rowers train first thing in the morning. Why? Simply, because rowing is a non-professional sport and most have classes to attend or jobs to go to. Couple that with mornings providing the best water, the least amount of boat traffic and the fact that saying you can see the sunrise every morning, provides a pretty compelling case.

Where possible, I avoid training first thing in the morning. The stress that early morning training places on my body, has lead me to be more susceptible to injury, sickness and frankly has taken me much longer to reach my goals and see improvements. 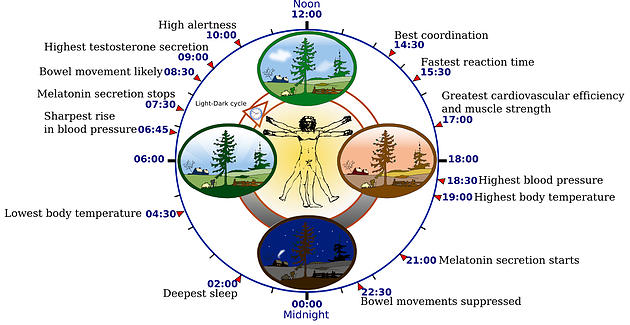 As an asthmatic, mornings are my nemesis. The air is cold, my body is cold and my forced expiratory volume and peak expiratory flow are at their lowest (Gaultier et al., 1977). This first became very apparent to me racing in a time trial on a fresh water river. Having always trained on the harbour (in salt water), the mean water temperature was always much higher than the river. The early mornings and low temperatures meant I would always suffer respiratory discomfort. This discomfort correlated with poor performance and high levels of frustration. However my 2k race results were always much better. Why? Time-trials started at 7am, 2k racing started at 9am.
The effect asthma had on my body was greatly reduced later in the day.

Another consideration to make, especially for maters rowers or those coaching them, is the stickiness of platelets early in the morning. A study by a group of Boston Scientist revealed that those that suffer heart attack or stroke are most likely to suffer one first thing in the morning. This in conjunction with the fact that the highest spike in blood pressure occurs first thing in the morning, has meant that medical practitioners suggest anyone with pre-existing cardiac conditions, avoid strenuous activity early in the day (Duda, 1987).

The body drops to its lowest temperature at 4am and doesn’t reach its peak until around 6pm(Minors et al., 1981). Studies show that there is a direct correlation between body temperature and nerve conduction making arousal levels and reaction times higher in the afternoon/evening, higher than they would be in the morning (Wingate et al., 1985). Increases in body temperature may also lead to an increase in carbohydrate utilization as a primary fuel source over fats and also possibly facilitate actin-myosin cross bridge mechanics, which allows muscles to generate more force (Starkie et al., 1999).

Another key area to address with body temperature is the effect on grip strength. In rowing there are two points of contact for force production, the feet and the hands. Isometric grip strength appears to peak between 2 pm and 5 pm and the isometric strength of the arm muscles has been seen to peak in the early evening as well (Atkinson et al., 1999).

Training the body so that it adapts to a state of ‘norm’ is what all coaches strive for. Weather this is physically or mentally it is important for the body to feel familiar. While perfect homeostasis, is really an oxymoron when it comes to sport, there are ideals one can take away from it. We see this particularly with professional sports. Often fixtures are changed to coincide with primetime television. These athletes will then adapt their schedule to train at similar times to their event. This wont be every session, but in the days leading up to the event, training and competition times will be similar.

It’s advisable to time physical training and preparation to coincide with the time of day at which one’s critical performance is scheduled, if this performance requires relatively high intensity activity for an extended period of time (Hill, Cureton & Collins, 2007).

Rather than get too scientific, and talk about fasted cardio, I prefer to train on a full stomach. The reality is, eating large amounts first thing in the morning is difficult. Melatonin is still being secreted and blood volumes are low in the stomach. While results from studies vary, there is no doubt that training after eating a substantial amount, means that muscle catabolism is kept to a minimum.

With all of this, I live an ideal life. I have a super flexible job, lots of holidays and access to start of the art equipment. I am not suggesting you change your program today, but maybe try a latter session on the weekend when you or your athletes don’t have to get up early and see what the results are.

Please visit The Rowing Academy for more posts and articles.

Effect of temperature on muscle metabolism during submaximal exercise in humans. Experimental Physiology. 84(4), 775-784.

One thought on “Why I don’t train first thing in the morning.”

Join us – blogging on Rowperfect

Posted on June 24, 2015October 21, 2020 by Rebecca Caroe
Would you like to upload your rowing blogs and articles and share them with a wider audience? Use… read more 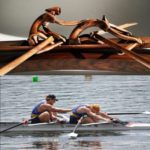 Posted on October 27, 2020October 27, 2020 by Tom Wall
Here is another story of individuals finding a way out of the Corona Crises. Crafting rowing art. Glen… read more

Posted on April 18, 2016October 23, 2020 by StrengthCoachWill
In this episode of the Strength Coach Roundtable, we talked all about strength training for rowing performance. Tune… read more