We got a question from a reader and this sparked some great contributions from Rowing History, Skiff rowing racing (Photo Credit: Skiff racing organisation) and so I thought I’d share it with you. It originated in traditional regattas when the skiffs used were built as matched pairs and so always raced in the same races. Therefore it didn’t matter if you had an older or newer boat, you were always racing in a boat of comparable age and wear/tear to your opponents.

In traditional regattas , the clubs bring only their oars to the event and the boats are already there waiting for you!”

“I have to confess that I know very little about the historical background of “committee boats” when it comes to “traditional regattas”. I think you have covered it well in your writing, Rebecca. However, I can imagining that a rower or a crew who had to travel from a long distance to reach a regatta would be offered a boat to borrow by the regatta organisers. It is also known that some crews put their own boat on a train or a ferry and shipped them far in advance as they did not want to row in borrowed boat. This, for example, happened at the very early Olympic rowing regattas. Of course, this could also be dangerous, as boats and oars could get damaged during transportation. Two examples: A very good Swedish coxed four got their shell smashed up in a storm aboard the large boat that transported the shell from Stockholm to Antwerp for the 1920 Olympic Games – the crew had to row in a crappy old boat and came dead last in their first heat; another Olympic Games example is the famous British double, Jack Beresford and Dick Southwood, who was waiting and waiting for their shell to arrive for the 1936 Olympic rowing. For days and days, they had to practice in a less that perfect double on lake Langer See until their own double was found on some sidetracks at the railway station where the Germans had “parked” their boat.

The first time I have read the term “committee boats” where in a text after the Second World War, I think from 1949. Otherwise, the term frequently comes up from the middle, or late 1960s. Many, many crews have blamed their poor preformence during a regatta on the “committee boat” they had to compete in.

In the beginning of 1990s I picked up a South American sculler, Jesus Posse, and drove him to the first World Cup regatta held in Sweden. He came with his little bag and his sculls under his arms. The committee boats that the Swedish organisers had managed to find where from local rowing clubs in the region. At larger. “elite”, regattas nowadays, World Cup regattas, World Championships, etc. I think that famous boat builders have shells to lend out to those rowers who came from far away.

Sorry that I cannot give you more facts.

The Skiff Racing Association has a set of Specifications for the dimensions of  Doubles, Singles and the Sculls used in them.

All Clubs have to have their boats made to these specs. Despite this there are minor differences in the boats owned by different clubs depending on how the tolerances allowed are used.

All regattas supply the boats which are normally loaned by the nearest Club to the Event.

Clubs use their own sculls.

Anyone else know more about the origin of Committee Boats?

8 thoughts on “What is the origin of Committee Boats at Regattas?” 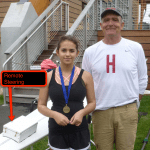 Posted on October 17, 2017November 2, 2020 by Rebecca Caroe
Today we bring you a heartwarming story of a coach whose innovation enables his blind athlete to race… read more

Rowing books to read in August

Posted on August 1, 2011October 23, 2020 by Rebecca Caroe
Image by echiner1 via Flickr August is holiday month and time to catch up on your reading. So… read more