While surfing through our rowing network, I discoverd this lines written by Rob Colburn. He describes the many styles of throwing a cox into the water.

There are many styles, the quick pitch off the end of the dock, the one-two-three heave, and the no-warning up-and-out which sends the flailing coxswain — usually face-first — 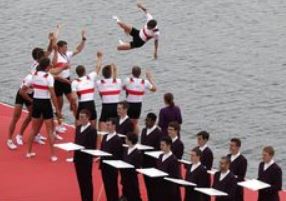 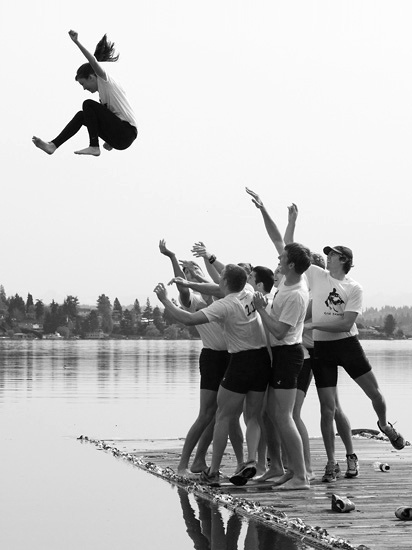 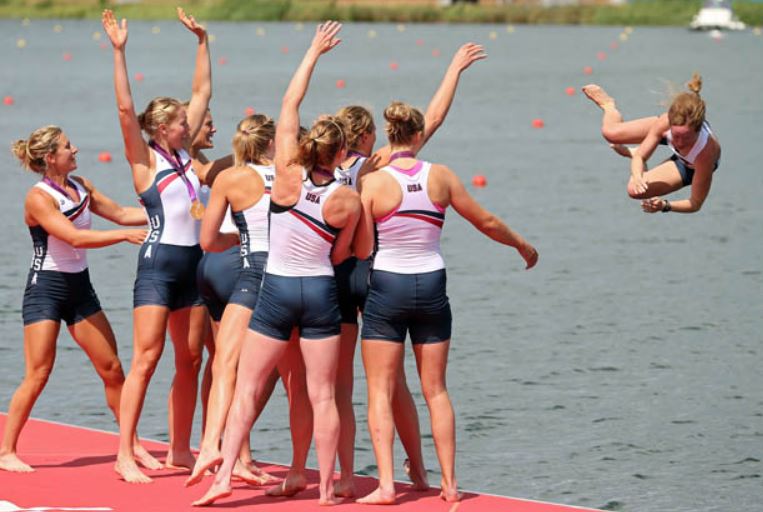 into the briny deep. Winning is the sweetest moment, and winning boats deserve to savour it fully. Throwing the coxswain in (no doubt a vestige of some primordial sacrifice to appease the water gods) is more than just a reward to the boat; it is also a photo opportunity. Best of all are the boats who treat themselves and their fans to the full ceremonial, counting off a swing for each of the rowers who created the victory.

This is Stroke’s opportunity to give the orders for a change. Sauce for the goose is sauce for the gander. Having absorbed the brunt of the coxswain’s verbiage at point-blank range all season, the Stroke is entitled to play some of it back.

“Lay hold!” With the full boat in attendance, especially if your coxswain is a squirmer, carry — or frogmarch — him or her down to the dock. Handling a coxswain is a lot like handling a shell, only they set up better, and you don’t have to wash them down after they come out of the water, our flying coxswains.

“Count off when ready.”
“Bow”
“Two”
“Three” With each count, the swings get larger
“Four”
“Five”
“Six” By now there should be some good amplitude going.
“Seven”
“Stroke”
“COX!” and heave the little bastard as high and as far out as possible.

You also find lot’s of educational E-Books about coxing in our shop.

One thought on “Flying coxswains How to celebrate my regatta win”

Posted on December 13, 2014October 28, 2020 by Rebecca Caroe
Take advantage of the Christmas break and watch some rowing DVDs.  There are also great bundled offers to… read more

End 2014 with some rowing club fundraising!

Posted on November 18, 2013October 22, 2020 by Rebecca Caroe
This is the first of a series of Coxmate product comparisons. The aim of these comparisons is to help… read more