Capturing video footage of your rowing is an excellent way of analysing your stroke in a way which isn’t possible from within the boat. It’s a great tool for rowers, allowing them to see their rowing from outside the boat. Coaches can show rowers exactly what their stroke looks like, where to improve and how effectively they made changes during an outing.

The secret to useful video analysis is planning. Decide what you want to achieve from the session and how you’re going to do it. This may be a general overview of a crew’s rowing. It may be a specific technical aspect of the stroke which can be highlighted by certain exercises, or a demonstration of the crew’s technique at race pace. Some coaches use video footage to show how a crew’s technique deteriorates over the length of a 2km piece. Decide what you want to capture and plan what to film (from where? Which angles?) and what the crew need to be doing to allow you to do this.

The key to a good video session is in ‘getting’ the footage. It really doesn’t matter what you use to get it. You don’t need to spend money on special equipment (although there is some great stuff available, and cheaper than you might think). Use what you have.

Many people now have smart phones or tablets with excellent video recording capabilities (many in HD) but they forget about them when it comes to filming rowing. These are fantastic tools which won’t cost you anything extra. Just be careful using them near the water!

Most ‘still photography’ cameras are also equipped with video recording capabilities. If you have one already, use it. If you’re buying a new camera and thinking of also using it for video analysis consider a few things. Some cameras will limit you to a certain length (or file size) per shot. This isn’t usually less than 5 minutes, so not a huge problem, but it’s something to be aware of. Check how much zoom is available in video mode. Some cameras lock the zoom when you start filming.

The range is huge and always improving. Anything modern will be more than enough to get really useful video of rowing. If you’re buying a camera specifically for your club to use it’s best to look for something with simple controls. Make sure it can easily be connected to whatever displays you have available. If lots of people are going to be using the camera it should be something which isn’t over-complicated by features you won’t need.  Ruggedness and durability will be more important than a high specification.

The market for compact, ultra-rugged cameras has grown rapidly in the last few years. The market leaders are GoPro. GoPro made a name for themselves in extreme sports, offering excellent quality HD video in a camera which is rugged and comes in a waterproof case with a lot of mounting options. The benefits of this to rowing are that the camera is robust, waterproof, and can be mounted on your boat, launch or coaching bike in almost any position. There is a suction mount which can be used temporarily on the bow or stern deck, or more permanent mounts can be stuck onto the boat. There is also a head or chest mount which can be worn by coxes or rowers. The wide-angle lens means that the crew and oars can be filmed from the stern of most boats, although this creates some distortion. I’ve used the GoPro Hero HD for the last year from the stern and rigger of my single and from a coaching launch. My advice would always be to tether your camera to something solid (I use a length of Dyneema cord to the footplate) and ensure the boat is dry before applying the suction mount.

The Contour camera is similar and some of their models offer built-in GPS to track speed and distance.

Camsports also make robust sports cameras but also allow a unique perspective through their ‘Coach’ video sunglasses. These give point-of-view footage from the rower or cox, giving a great insight of rowing within the boat.

Rowing ‘gadget guru’, Tom Carter, writes a blog providing some really useful information on how he films his training and races, combining speedcoach-style data with video for complete analysis (as can be seen in the video of Tom’s 2012 Turin Silver Skiffs race).

As used by some of the top national teams, video goggles provide the rower with a live view of what the coach is filming. This is an amazing concept as it allows for an instant process of feedback, review, change. The system doesn’t come cheap, though!

Where you place the camera will depend on what you have available and what you want to capture. For a general overview of the stroke, filming from a coaching launch is ideal. This allows you to film from either side, from the stern or even get a view of the crew from towards the bow. A coaching launch is the most flexible solution, but not always possible on crowded stretches.

Filming from the bank can be just as good. Side-on shots can be filmed as crews pass. A camera with a good range of zoom will extend the amount of time you can spend filming each pass as you can get a view of the crew approaching, passing and rowing away. If you film from the inside of a corner you can get a longer pass. From outside of a corner you can film a crew from directly behind the stern (or in front of the bow) as they row away from or towards you. Filming side-on from a bike is also possible, but only on paths which are wide, smooth and, above all, safe. I’ve known coaches to mount a GoPro camera to their bike and get decent footage. I’ve also heard stories of coaches using a tandem bicycle so one can steer while the other films! Be creative!

Filming from within the boat gives a lot of detail of the rower’s body movements. Small cameras can be mounted on the stern or bow, or even on the gate (New Wave sell a GoPro mount which goes under the top-nut). You’re limited to a fixed position, but this can be changed a few times during an outing if needed.

Filming from above is great for checking timing and blade angles. Use a high bridge and get the crew to row through it a few times.

While filming, talk about the rowing you see. This helps when you come to view the footage as it will remind you of what the crew were doing and any technical problems you spotted at the time.

Remember what your objectives are and focus on getting the shots which will illustrate what you want to show. It’s easy to over-film and, while this gives you a lot of options, it isn’t very efficient when you come to review the footage with the rowers.

One of the main benefits of video analysis is being able to show crews how they rowed in a particular session. One of the drawbacks (unless you’re using Video Goggles) is that the rowers usually only get to see the video at the end of the session. While the rowing is still fresh in their minds during the review, the chance to make changes is not until the next session. If you have an iPad consider using it as both a camera and a display and show the rowers parts of the video while they are still in the boat. Filming ergo sessions is useful in this way as it allows rowers to view the footage and immediately make a change, review it and repeat. The key is to watch the video as soon as possible after the outing. Make sure you have the right cables to connect to your computer or display. The more time between rowing and viewing video the less effective it will be. If you’ve not been organised and filmed too much you may waste time finding the shots you wanted to talk about.

Reviewing video footage as a crew or even a squad is a fantastic way of getting all of your rowers to row the same stroke. This kind of review session also helps to educate your rowers and improve their skills at technical analysis of each other. Big displays make this possible. Smart phones can be great for video but small screens make viewing footage difficult even on a one-to-one basis. Download video files to a laptop or get the correct cable to link to a TV or computer screen.

Smart phone apps such as Coach’s Eye allow you to show slow-motion or frame-by-frame video, as well as illustrating technical points by drawing lines on the screen.

Another way of working towards a standard technique across your squads is to share video. Making a YouTube channel for your squads is a good way of making video accessible to all, at any time. It also means you can keep an archive and show rowers how they have improved over a period of time. For large files, or to keep your videos out of the public domain, share the files with DropBox so your athletes can download to their own computers.. 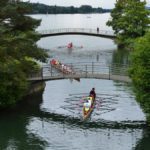