It’s not everyday that you can get one-on-one coaching input from a former Olympic Champion sculler… until now. I took the opportunity last season to get some video analysis of my sculling done by Xeno Muller (Olympic Gold and Silver medalist in M1x).

Xeno provides instructions of exactly what to record while sculling. For me it was the Pick drill and various Pause drills as well as continuous rowing. You only need a few minutes of footage. This footage helps to highlight areas where technique breaks down and can be improved. I filmed my sculling using a GoPro Hero HD camera mounted on the side of a coaching launch, but anything which gets a close, side-on view is fine.

Uploading is done via DropBox and is very easy. Xeno then records his analysis and overlays the video of his coaching onto your sculling video before returning it to you via Dropbox. The way that Xeno coaches by recording himself means that he can better describe and demonstrate technical changes, rather than trying to explain through text. This gives a visual reference as well as helping you to understand the ‘feel’ you should be looking for as Xeno talks through the stroke.

Xeno gave me about 50 minutes of detailed video analysis, breaking down each part of the stroke and explaining what to look for and how it should feel. You can watch Xeno’s ‘preview’ of the service here.

The video analysis was useful not just for me, but for other scullers and coaches as well. Xeno described what he was looking for through each part of the stroke so I am able to use his analysis when coaching others, even for areas where I didn’t need to change my own technique. 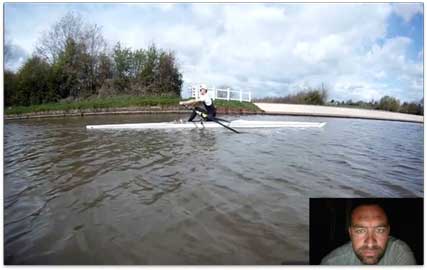 Xeno covers a lot in the time he gives you. He looked at how I am set up in the boat, how I hold the oar handle, how I sequence on the recovery and the drive, muscle use, posture, head position, blade path… everything.

Xeno’s approach is to always be positive in his critique of your sculling. He did give me a light-hearted telling-off for ‘blending’ the recovery sequence, which was fully deserved! He explains how and why to make changes, not just what to do, talking a lot about feel but also about the physics of the stroke to help you get a full understanding. He recommended specific drills for me to work on to improve each fault and a few simple outing plans to work on my connection and drive.

Is it worth it?

Xeno has a lot of experience of great coaching (having been coached by Harry Mahon) and is now passing on that experience. His use of technology allows anyone to make use of the service.

Rather than feeling like I was betraying my coach by seeking a second opinion, we both felt that this was a great opportunity to get input from a high-level coach and learn more about how we can improve both as sculler and coach. We picked up on new issues and got a different perspective on parts of the stroke which allow us to develop new ways of working on technical weaknesses.

After watching the analysis it felt like there was a lot to do to improve, which is testament to the depth that Xeno goes into in his stroke analysis. When I got into the boat I could hear Xeno’s advice and instructions going through my head and remembered various parts of his video as I thought about each segment of the stroke. I watch the analysis every couple of months to refresh my memory and review progress.

There’s no doubt that Xeno knows good sculling, but he is also excellent at explaining the concepts and realities through his coaching. I feel that my sculling has improved technically, and I am going faster. There is still work to be done, but the extensive analysis and advice I got from Xeno has provided the way forward.

I would recommend that the service is best used a few months into the season, after you’ve had a chance to settle in your boat but not for long enough to get into bad habits. The principles are the same for everyone, so I’m sure it is applicable to novices through to expert rowers.

When considering asking Xeno to look at my sculling I did think that I might regret it—having my technique torn apart my the world’s best was daunting—but this was far from the case. It’s a valuable opportunity and, for me, was definitely one worth taking.

Ben is a lightweight sculler and has been rowing since 1995. Rowing for Gloucester Rowing Club, he won Lightweight Single Sculls at the British Rowing Championships in 2011.

Posted on February 6, 2014October 22, 2020 by Rebecca Caroe
The Rowperfect classic uses a serial port cable to join to a PC. Sometimes the wires pull out.… read more

How rigging builds comfort in your rowing

Posted on August 5, 2013October 21, 2020 by Tobi
COMFORT FROM RIGGING Ever take a long drive while sitting in a car seat that just didn’t fit… read more

Christmas Gifts with a rowing theme

Posted on October 31, 2018October 15, 2020 by Rebecca Caroe
Reminder – last posting dates for mail order shipping are coming up. Please get your orders in quickly… read more