It’s not an expensive flight to Tennessee and the 2017 Masters Nationals but I thought I’d drive it.  My mother was raised in Huntsville, Alabama and most of the annual trip there from Maryland followed the same route I drove the other day, across mountains range that seems more easily traversed than back before I-81 came through (yes, I remember the days before the interstate) and a cultural chasm that seems just as wide as it was back when grandma half-facetiously suggested we paste a confederate flag sticker to our bumper, so that our out-of-state plates didn’t make us look like Yankee agitators.

Grandpa was born about two hours west of here, in Peeled Chestnut, Tennessee, and I’m going try to peel off a few hours to get out to the ancestral homeland when I get a chance. He was a genuine hillbilly — he would have pronounced in “gin-u-wine,” as he did that time Stephanie said she’d only visit Huntsville if he taught her how to shoot and he took us out back of the house he’d built just outside the city limits, put a .22 revolver in her hands and said “that there’s gin-u-wine Saturday night special”.

In the meantime, my little cabin is outside of Clinton, Tennessee is conveniently located twenty miles east of Oak Ridge and twenty miles north of Knoxville.

Or, maybe it’s not convenient to anything except the Museum of Appalachia just down at the bottom of the hill – twenty miles from Knoxville ain’t ground zero for nightlife.  And there were definitely a couple of gin-u-wine hillbillies in Harrison’s, the chain restaurant where I went to dinner the first night.  Most everybody else looked like they were in some kind of benevolent biker gang, though there were a lot more Harley logos on t-shirts than hogs in the parking lot.

But, while every city kid of my generation has seen “Deliverance” and fears the sound of banjos at night once we get beyond the range of reliable public transportation, I’m enjoying the countryside. This is probably the most beautiful place I’ve ever rowed, with wooded hills rising directly from the shoreline of a sheltered course.   And the folks around here are as nice they can be – the Harley T-shirt guys holding the door for you and the waitress talking your ear off. 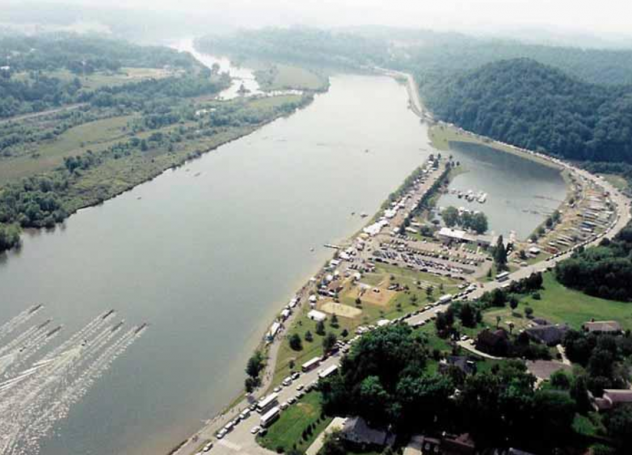 There was another fog delay today so I rolled out of the hills around lunchtime to get ready for my first race, another mixed boat.  Tuesday, Mark mentioned that we were going to be racing in the B8 and I said “what the hell are two geezers like us doing in a B boat.”  And he squinted in my direction, smiled cagily and said simply: “young chicks.”

I’ve been listening to a lot of country music lately (Dwight Yokum singing “GIT-ars, cadillacs and hill-billy music – the only things that keep me hangin’ on” is pretty much my walk-on music).  One of the basic assumptions of country music is that young girls will kill you.  And Jack and Meredith stroking us at a 39 for the body of the heat damn near did kill me.  It must have looked a little funny from the shore – Steve and I in 6 and 5 seats, with almost a foot on our stroke pair, trying to match their timing and reach.

But the problem with rowing at a 39 (aside from the potential for killing one of the rowers outright) is that there’s a flail factor – you’re missing water and wearing yourself out.  Which we did.

Though, for all the excitement of trying to hold the stroke rate, it must have been kind of boring race.  Close races are exciting to row, but I’m not sure anybody moved on anyone after the first 250 metres – no back and forth.  Most annoyingly, one of club team boats jumped out to a two seat lead and just held it despite our overdriving stroke rate.  It always hurts to lose bragging rights to your own teammates, especially by less than half a second. Meanwhile,  Western Reserve took the heat by the boat length they’d established at the start.

But, after a uniquely unanimous boat meeting, we decided that if we actually settled during the settle, and stayed long, we had a chance in the final – and we could at least beat those tenacious clubsters.

After lunch, we raced the Men’s E4 in a straight-to-finals event.  I was back with my boys – the stern 4 of the E8 that had taken club gold the day before.  We had a uniquely crappy warmup – we did a build and couldn’t get over a 34 and had all the power of a fatigued high school crew, and boat was flopping all over the place.  We eventually did a competent start and 15, but when we pulled up to the line against pretty physically intimidating array of boats – including crosstown rival Potomac Boat Club — it looked a little grim.

But, damned if we didn’t pull it together in a big way. Not big enough, mind you.  We put Potomac away pretty early and gradually pulled away from third place New Haven.  But Riverfront Recapture put us away pretty solidly, too, winning by four seconds.

But still – and I rarely take comfort in this – it was a really beautiful row.

My first year on the Comp Team, I was in a 4 with our incredibly competitive stroke, Ralph (“sometimes I think I hate losing more than I like winning”) up in Philly and we won, despite a pretty awful row. It was maybe my first medal, and my daughter was coxing and it was the day before Father’s Day so I was pretty happy with life.  And I wanted a picture of the boat, but Ralph was so pissed at the way we rowed I was almost physically afraid to ask him to pose with the rest of us.  His intensity helps make him an amazing stroke, but he can be a little intimidating.

But, after losing this race (short lived Nike slogan “You don’t win the silver, you lose the gold”. They had to drop that one), Ralph turned around and high-fived Craig, in three seat, who passed it down to Steve and to me in bow.  It was one of the best pure rows of my life and, hell, it was good for The Sport, because when you row well and lose you say things like “man, those Riverfront guys are pretty damn good,” rather than letting bitterness and regret eat away at you (“those lucky bastards, if we hadn’t been waked/rushed so much/sucked, we would have….”).

It was the sport living up to its billing.  Plus, a silver.

I was hoping for the same result, or better, in the Mixed 8 final.  And we had a warmup as beautiful as the four’s was awful, skimming over the river and accelerating effortlessly.  During the race we settled properly and rowed well, rowed hard.  But the race turned out to be a virtual repeat of the heat, with Greenwich – with two rowers late of Capital, the turncoats! — coming in from the other heat to push us off the podium.  At least the other Capital boat took the bronze.  Better to be beaten by  friends than some gang of strangers; they earned their hardware with a really strong row.

The mixed boat was the next to the last race of the day and the sunlight was turning a little golden and we walked over to get a beer, all the adrenaline and energy and clatter and action of a day of racing slipping away and the guitarist playing strangely melancholy music – who wants to hear “Fast Car” after a day of racing?  — as we chatted and rehashed.  Ebb tide.

It’s addictive, though, isn’t it?  The highs and the lows, the medals and the aughts. I was still a little down as I walked the 800 miles to my distant parking spot along the road, but that’s just the rhythm, you roll with it and almost enjoy it.  You wouldn’t feel down if it wasn’t important to you. And as much fun as a long weekend at the beach might have been, doing something important that tests you and brings you together with friends so you really feel the highs and the lows is an extraordinary thing.

And there’s a beautiful sunset over the hills and another race tomorrow, another chance at redemption and that elusive high that comes from winning or just a a few minutes of pure joyous exertion.

In the meantime, guitars, Cadillacs and hillbilly music keep me hanging on.

Posted on September 30, 2018May 21, 2021 by Rebecca Caroe
Once a year the world becomes very keen on rowing when the Oxford and Cambridge Boat Race dawns.… read more

A Call to Action — Rowing for life

Posted on June 10, 2011October 23, 2020 by Spring
Support RRC Members and Save a Life Today we offer you the opportunity to support members of the… read more

Posted on August 10, 2008November 3, 2020 by Rebecca Caroe
The visibility just dropped significantly and they have stopped racing in the Olympic Rowing with the womens and… read more