As an athlete, you are told that if you don’t change you won’t improve. Shouldn’t that apply equally to

coaches? So, as a coach, let me ask you a simple question:

“When and what were the last two things you did to change the method or the content of your coaching?”

Some excellent work has been done to help beginner coaches to improve their delivery of beginners’ courses. I would particularly cite Jim Flood’s contribution (available through Rowperfect.co.uk). However, my proposal is more about content than style.

I suggest that beginners should be taught a specific and simplified variation of rowing which, whilst directing them towards a perfect understanding of rowing technique, doesn’t waste time on its intricacies.

Here are a few examples.

What is (probably) the most important first skill for a beginner?

If the boat isn’t stable then those who are trying to learn how to row will not progress – period. It is therefore a prerequisite that all rowers are shown how to balance the boat effectively whilst sitting still.

Hack 1: teach all rowers to set the boat by sitting at half slide, keeping the handle in their laps, in contact with their thigh (or in the crook of their arm) so that any inclination of the boat onto their side is immediately met with resistance without any conscious response from the stationary crew members.

Why do we ask beginners to feather?

It causes all sorts of issues and challenges (at least, if feathering doesn’t, then the subsequent attempt at squaring certainly does!). Contrary to common belief, it has nothing to do with air resistance and everything to do with dealing with the inevitable contact between the spoon and the water surface on the recovery. However, full feathering threatens crab catching and excessive changes in grip etc.

Hack 2: forbid rowers to fully feather – allowing them to turn the blade only 45º at most, achieved only by dropping the wrist joint. This is more than enough to ensure the spoon bounces off the surface when necessary. The secret is to ensure that the grip on the handle doesn’t change during the rowing cycle so that merely flattening (raising) the wrist joint again is “guaranteed” to square the blade and avoid the dangers associated with rowing under-squared.

Why separate the roles of inside / outside hands for feathering and squaring?

It’s just an unnecessary complication which can be introduced later in a beginner’s rowing career.

Hack 3: Use both hands to feather and square. It’s simpler, makes changing sides less traumatic and also reflects the skills you will need as a sculler – i.e. using both hands. Again, the secret is to ensure that the grip on the handle doesn’t change during the rowing cycle (i.e. “imagine supergluing the pads of your fingers to the handle when preparing for the first stroke”).

If I said to 100 rowers “Sharpen your catches”, 60% would start the drive more aggressively and 40% would try to cover the spoon (get it into the water) more quickly. The term is ambiguous and unhelpful.

Hack 4: Drop the word catch and replace it with two words indicating two separate actions: e.g. placement and lock-on. These need to be explained, taught, learnt and practised separately.

Later we can discuss the “Virtual Box”™, the need to sit still at front stops on every stroke and the benefits of moving your brain from your backside into your hands.

I have been coaching for about 25yrs and most of it has been with adult beginners. Being based in Oxford for over two decades, I have had the unusual privilege (sic) of witnessing dozens of other coaches – mainly with college crews – at work with their own beginners. My observations leave me with a mix of incredulity, fascination, frustration and, occasionally, inspiration. I owe a debt of gratitude to these unnamed sources of good ideas – even if the creative spark was sometimes ignited by the banality of their coaching style! I’m also indebted to numerous other parties I have listened to, read about or otherwise come into contact with in my years as a rower and a coach.

There is a small possibility that a tiny element of my coaching is of my own making but I’d welcome more contributions from others to develop the ideas further.

It is my intention to provide an online service via www.oxfordrowcoach.co.uk (currently under construction) to prompt and lead coaches through the early stages with their new beginners. Initially, I’d like your opinion on a few of the principles involved.

Which rowing style do you use?

Posted on February 28, 2018October 14, 2020 by Rebecca Caroe
Image via Wikipedia There are many ways to effectively move a rowing or sculling boat – but knowing… read more 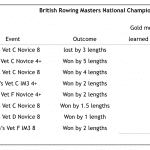 Learn to Row as an asset to the club 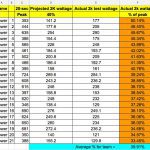 How to predict your crew’s 2k score (in 20 seconds)

Posted on February 14, 2018October 14, 2020 by Rebecca Caroe
I’m not a great believer in predictions, especially when it comes to human effort. There’s too many variables… read more