John established himself as a coach back in the 1970s and is expert in coaching lightweights.  Notable achievements include: 17 medals at the World Championships, 2 medals at the European Games, 2 Medals at the U23 Games and 3 crews selected for the Olympic Games.

Some of his highlights include: coaching the Danish Men’s squad between 2003 – 2007, working as the Head Coach for Holland Lightweight Squad between 2008 – 2012, competing in 25 finals and accumulating numerous medals.

Over 70 of the athletes John has coached, have gone on to represent their country.

John brings a wealth of knowledge and expertise to RowingChat this month, especially for lightweight rowers and their coaches. Hear about his experiences from coaching at national level, pick up some excellent training tips and utilise his vast experience and knowledge by asking your own questions!

We will be talking with John on:

Register below to view the RowingChat or ask a question.. 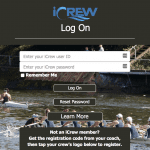 Posted on May 7, 2018October 13, 2020 by Rebecca Caroe
iCrew.club Software was developed by Kevin Goyena for use with his club, MBRSC.com where head coach Helen Tilghmann… read more

Posted on May 10, 2016October 23, 2020 by Rebecca Caroe
Finishing the rowing and sculling stroke The finish is the final part of the drive where the rower draws the handle(s) in… read more