The first World Championship of the new Olympic cycle 2017 was in Sarasota, USA. Moderate weather conditions allowed results close to the long-term trend (Fig.1): the average speed of the winning crews was 13th fastest over the past 25 years.

The general trend shows a slow growth of the winners’ speed at 0.37% per year. The highest growth was still found in both eights and lightweight doubles (RBN 2016/08), the slowest – in open sculling events:

The following table shows the average stroke rate over 2km in the A finals (GPS data of M4x was missing and replaced with the data from semis):

The average stroke rate in the winning crews was the highest among all finalists, which is different from the previous year, where the winners didn’t have a significant difference in stroke rate (RBN 2016/08).

Analysis of the race strategy using our traditional method (RBN 2003/07) has shown that the winners had the lowest variation of speed among all finalists: the winners spread their efforts the most evenly throughout the race, with a relatively slower first 500m and a faster middle section.

The above conclusion can be seen in more detail using the 25m splits data, which became available this year (Fig.3 shows the average data in the 14 new Olympic categories + the recently excluded LM4-). The winners had a distinctively higher speed in the middle of the race, which was achieved by means of a higher stroke rate.

Effective Work per Stroke (EWpS) in the winners and silver medallists was the most evenly distributed: it was lower during the first 500m, but higher during the second half of the race:

This could be explained by two reasons, or a combination of the two:

3 thoughts on “Rowing stroke rates rise at the Worlds” 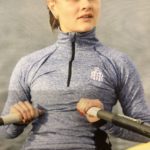 Posted on April 2, 2018October 13, 2020 by Rebecca Caroe
Leaders in rowing should always emphasise good rowing technique.  This is a soapbox that I’ve ranted on before… read more 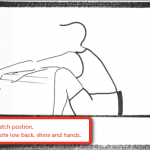 The drive in rowing technique

Posted on April 22, 2020October 14, 2020 by Rebecca Caroe
The drive phase is the part of the stroke where the athletes move the boat. That happens during… read more