The catch is one of the most important parts of the rowing stroke and it’s over in a fraction of time.

It probably takes between 0.3-04 second for the catch to be executed. And during that timeframe, the athlete has to steady themselves into the front, have the blade square, turn their core on, put the blade into the water, change direction as far as far as the leg drive is concerned and it all happens in that very short timeframe.

So it’s important for a few things to be understood

The timing of this is really critical and takes only a fraction of a second so it needs to be practiced.

Ken Davey suggests that you film the athletes as they are taking the catch and film the blade going into the water and the body at the same time. And you will soon see (as will your athletes) if they are not actually getting the blade into the water before the leg drive occurs. There will be some body movement in the best of athletes.

The intent of pausing at the catch is not to have it as part of the rowing stroke, it’s purely there to demonstrate that you can sit at the catch without fear and you can put the blade into the water very precisely if you have everything else done and that’s all you are focusing on.

The catch: Over in a fraction of a second, but vital to having a good rowing stroke.

Resources for coaching the catch

4 thoughts on “The rowing stroke catch – a millisecond”

Everything is wrong with how we coach beginner rowing!

Posted on January 13, 2014October 22, 2020 by Tobi
Sign up to watch live or get the recording afterwards as we interview another expert in rowing –… read more 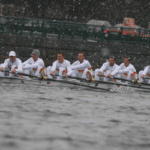 Posted on November 25, 2019October 15, 2020 by Tom Wall
There’s a good Rowing Reddit community and this question was posted recently – What clothes to wear in… read more