I sat in the bow seat of a coxed four for a long distance race (the Fours Head of the River). It was remarkable for two things. Firstly we were a girls sweep crew and being chased by a mens quad and secondly I learned the difference between port and starboard.

Des was our coxswain – a very experienced fellow who was skinny-as-you-like and never wore enough clothing – yet he never complained about being cold.  That man sacrificed his personal comfort for giving us the lightest cox weight contribution to the crew every time.  He wore these hideous light blue and white striped leggings (they must have come from a bargain bucket) and little slip-on neoprene sock/shoes and would hold the boat rigger for us while knee deep in cold water waiting for us to get out visibly shivering and totally uncomplaining.  What a dude.

The crew was being stroked by Teg – an international lightweight coming back to fitness following injury.  And there were two heavyweights and another aspiring lightie in the middle.  So we knew we stood a good chance in the race as we would be pushed along by an expert at both ends of the boat (stroke and cox). 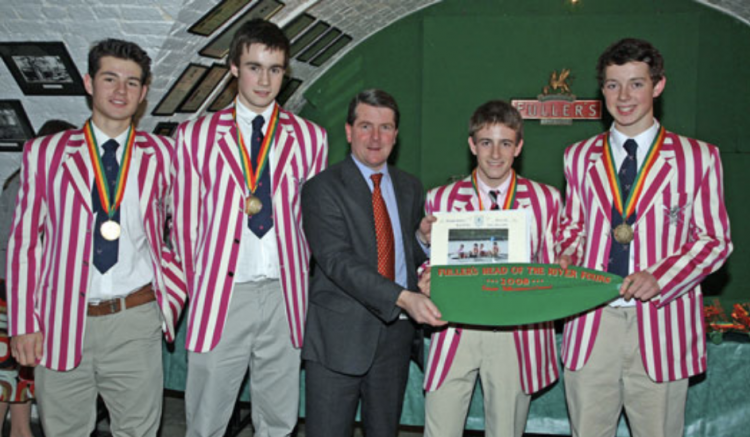 Fullers Brewery sponsor the Fours Head and give generous prizes of green replica oar spoons and medals on striped ribbon with a pin badge with the year of the win.[/caption]

Waiting for the start

This is probably the worst part of any race for me.  I get nervous.  And so ceding control for everything to the cox is a delight – all I have to do is listen to him and do as I’m told.  Until we got into place in the marshalling area.  Then you wait.  Then you look around at all the other (clearly more expert) crews and worries surface.

Des sat up in the coxes seat and tapped me on the back.

Hey Rebecca, you know there’s a mens quad starting immediately behind us in the race?

Yes I certainly did know this.  They were from the newly formed Orion Boat Club who’d got going for the Amsterdam Gay Games the year before.

If you see them closing on us, could you tell me if they are going to pass us on the bow or strokeside?

Yes, I certainly could do this.   The London River Thames bends in both directions over the Fours Head course and so the overtaking crew gets priority and our job should be to give way and try not to lose our prime position in the middle of the stream while allowing them to pass safely.

My only concern was that Des faces forwards, I was facing backwards and so how was I going to describe the passing manoeuvre? I could say they’re coming on the right (but that would be his left) or I could try saying bowside or strokeside.  Which would be the clearer instruction in the heat of the race?  I worried particularly because I know that my brain function fades very obviously when I’m tired and focusing on racing…. seriously – it just doesn’t work properly.  Probably oxygen deprivation.

I looked down at my legs – bare in the November chill and partly covered with our club’s red shorts and noticed I was wearing rowing socks!

Hey, Des – I’m wearing my bowside and strokeside socks – so I’ll have no trouble telling you which side they are passing.

And I pulled my feet out of my shoes and leaning backwards, waved them up in the air so he could see my lovely rowing socks.

Rebecca, you idiot – you’ve got them on the wrong feet!

What happened to the mens quad?

The race is processional and so you start line astern and paddle increasing pressure and rate until you pass the start line outside Tideway Scullers School boathouse.  The first stretch towards Barnes Bridge is a gentle bend towards the stroke side.  The orange-oared mens quad closed gradually on us as we got into our racing stride during the first four minutes.  I kept a close eye on their progress.

It’s interesting how slowly a boat gains ground on another when their speeds are similar.  They’d started about three boat lengths behind us and so we were looking at about 150 feet of open water between our crews.  I decided not to say anything to Des until it was very clear that they were beginning an overtake move.

Through Barnes Bridge – Des steered expertly before the bridge so we passed on a slight diagonal under the centre arch of the railway bridge and called a push for 20 as we cleared the under-water riffles below the bridge pilings.  All good.

Now the river starts a bend towards bowside after passing the Bandstand and we were holding distance on the men.  Des continued to do his expert stuff and my mind focused on his calls and getting my timing right off the finish (I have a tendency to rush away from the backstops especially when racing).  Before I knew it we were alongside Chiswick Eyot and well into the next bend and Hammersmith Bridge was probably just appearing in Des’ line of sight in the distance.

We’d dropped the quad clean away.  They never challenged again.  And I did not have to remember bowside or strokeside for their never-to-happen overtake.

Thanks to my rowing socks. 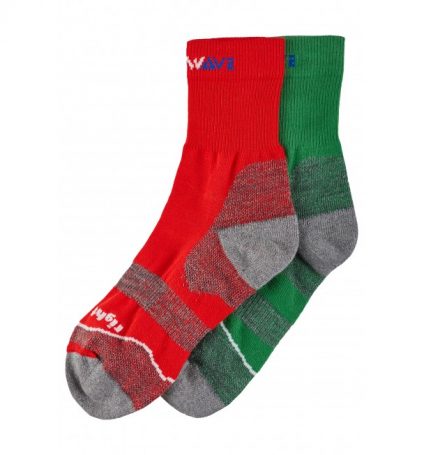 Avoiding Rowing Blisters: When Prevention is Better than Cure