‘Bub’ Jarvis ‘3’ in the COD’S crew was a relation to me. He was instrumental in coaching and mentoring me while I was a school boy rower at Murray Bridge. His wisdom was passed onto me till his death. His rowing knowledge was incredible. I spent many hours in the club room at West Lakes on regatta days sitting with Bub, dressed in his tattered Olympic Blazer, Charlie in his State Blazer, Florence with her blazer and Margaret.  While they all drank Shandies and discussed the events unfolding on the rowing course. They could always pick the winning crew.

Florence Eaton who was instrumental in establishing women’s rowing in present day Australia and has a perpetual trophy rowed in her honor at the Kings Cup.

Margaret’s husband was an ex State rower and life time friend of Bub. Margret is Australia’s oldest rowing groupee who at 93 still attends the regatta at West Lakes.

Margaret has never rowed yet has the honor of having 2 rowing boats named after her.

Bub gave Margaret one of his rowing medals presented to him for winning the Kings Cup, the same year she was born. This is  proudly worn around her neck and Margaret is wearing it in the film.

I have 3 of Bubs other medals. The first dated 1914 and the other 2 from his Kings cup wins.

Just before the doco got off the ground my father passed away and all the photos of Bub and his brother, Cam, along with their handmedowns were thrown out by my non sentimental sister.

I organised for MBRC blazer to be made for the premier of the film from a firm at Henley on Thames – I and James McRae are still waiting for our bumble bee cricket hats from them!!!!

So much more ended up on the editing room floor thanks to Caroline or it would have been a 4 hour film.

I hope you enjoy the video. 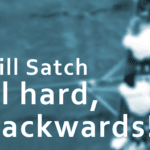 Will Satch in his bedroom slippers

Posted on June 2, 2016October 23, 2020 by Rebecca Caroe
Once you’re an international athlete, outsiders like us assume that strongrands must stronge lining up to sponsor our… read more

Posted on August 13, 2008October 23, 2020 by Rebecca Caroe
Heather is writing on the US site Row2k Life of an Olympian So life can be pretty boring… read more