Incorporating GPS into Coxmate products was a big project for us last year. Even today, the technology continues to advance and there are a few enhancements for GPS happening now. The main objective is to correct for the refraction through the ionosphere. The ionosphere is a portion of the upper atmosphere distinguished because it is ionized by solar radiation and in the absence of selective availability, can be the greatest source of range and range-rate errors for GPS users. By correcting for the refraction through the ionosphere, the GPS will give a higher degree of absolute accuracy. GPS systems are introducing land based reference points. These are precisely known and used to determine a correction factor. The European version of this is known as SBAS.

However Coxmate is not greatly concerned with absolute accuracy. You aren’t going to get lost using a Coxmate SX with GPS! We need high relative accuracy over a relatively small area – you rowing down your river or lake.

We know from experience that the quality of GPS devices varies significantly. Coxmate has selected ones which perform well. We use no smoothing to condition the signal – avoid damping the responsiveness of the speed reading.

The bigger technological problem that we deal with is due to the boat speed changing through the stroke. If for example you were rating ~24 strokes per minute: The stroke period would be 2.5 seconds and the GPS gives an update once per second.

The graph above shows the boat speed over 6 strokes – black line. During this period there are ~15 GPS updates. The Coxmate SX updates speed every stroke. From graph you can see how some strokes receive 2 and some 3 GPS readings. The horizontal red line is the average of the readings received during the stroke. For example the first reading is average value of GPS Readings 1 and 2. The second stroke is the average of 3, 4 and 5. It can be seen that the speed value updated every stoke is oscillating by around +/-5%. The size and frequency of this oscillation will vary depending on rate. If you rate 20 or 30 per minute, then each stroke would have exactly 3 or 2 GPS readings and there would be no oscillation.

The Coxmate SX, when in its default setting will have smoothing set to ‘Auto’, where it adjusts the number of strokes that speed is averaged over according to rating. This optimises requirements for fast response and smooth signal.

The SBAS and systems like it will undoubtedly become standard in the future and it will make it easier for poorer quality GPS chips as used in phones to improve accuracy and responsiveness. However it won’t fix the stroke speed oscillation.

2 thoughts on “Peter Hodson talks about the accuracy of GPS” 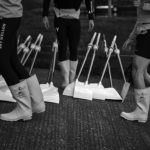 Posted on March 23, 2016October 23, 2020 by Rebecca Caroe
The Cancer Research UK Boat Races are amongst the oldest sporting events in the world. This year on Sunday… read more

Posted on October 12, 2014October 21, 2020 by Tobi
Via Space Saver Rowing Systems… To expert coach Jimmy Joy, planning is everything when it comes to dealing with… read more 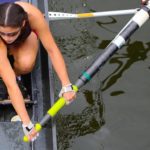 Why all rowers need gloves…. sometimes

Posted on December 9, 2018October 15, 2020 by Rebecca Caroe
Rowing has a macho image, particularly with regard to “hardening up” and “being tough”.  This shows up mostly… read more