The New Zealand national rowing championships at the weekend saw a major upset when Mahe Drysdale, long the fastest sculler in the country was beaten by Nathan Cohen in the single scull race.  Interestingly the third spot was won by lightweight, Peter Taylor who also won the Lightweight 1x event over Duncan Grant.  Drysdale placed third in the double sculls competition with Peter Taylor while West End clubmate Bradley Jowitt who raced for Samoa at the recent world champs joined forces with visiting Belgian sculler, Tim Maeyens to come fourth.  Full results here and here.

The New Zealand single sculls title has not been held by many people in recent years, before Mahe, the long time winner was Rob Waddell who overthrew Richard Newey (one year title holder) and before him Eric Verdonk who won 7 singles titles in a row.

Bankside chatter noticed that he was several kilos heavier than at the Worlds in November and speculation surrounding his back injury and arthritis scare was active.

Guest Post: Scott Frandsen – What Does Excellence Mean to You?

Posted on November 10, 2011October 22, 2020 by Spring
We subscribe to Scott’s blog.  He is a challenging thinker and being an expert pair rower often has… read more

Posted on August 30, 2009October 21, 2020 by Rebecca Caroe
Some surprising results on the last day of the worlds. Old names fail to make the grade and… read more 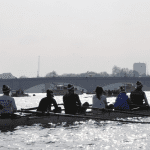 Tips for a faster racing start

Posted on May 4, 2018November 2, 2020 by Rebecca Caroe
With a big regatta coming up, I guess most of what can be done of preparation is done… read more