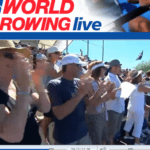 We reported in February on the very public $2.2 million loss made by the New Zealand world championships last year and yesterday the independent report on why it happened was published.Read the full report here.

Is it a good thing that the S**T hit the fan?

Well, there is probably a small golden nugget at the heart of this mess

[Also the report’s authors don’t know the difference between the words complementary and complimentary in the context of free tickets!].

The authors are damning

Focusing their criticism on the event organisation and management team:

So, what do you think?  Is this public dirty-laundry-washing appropriate or necessary for the sport?

This is a long article and we detail some of the report’s findings below with [our comments].

The board did not establish appropriate financial management tools to track and report progress.

The event did not formally report to Rowing New Zealand and they didn’t demand improved reporting.

When the ‘event scope’ changed from $8m to $14m there was no effort to revisit the assumptions and obligations of the initial funding agreements. [That’s a 75% increase in budget – wow].

Too much emphasis was placed on the ‘success of 1978’ which remained strong in the minds of the Board.

“It is difficult to overstate how flawed it was to compare the reported outcome of an event in 1978 New Zealand with the forecast for an event in 2010 New Zealand.”

The contrast between the two dates in socio economic and market influencing terms is significant enough to warrant the 1978 event largely irrelevant.

Market research – too much assumption placed on this as a forecasting tool [which it isn’t].

As costs increased so too did sales and revenue expectations.  [why do you suddenly think you’ll sell more tickets just because your costs are rising?]

Nobody actually said “if we don’t sell all the tickets we’ll make a loss”; In fact if we rely on the CEO report 6/12/10 we can conclude that if the event had achieved the ticket sales budget it would still have incurred a loss of over $1m.

They kept changing the budget (7 separate ones)

Budgets became forecast tools to capture the desired Event outcome rather than a tool to manage the delivery of approved outcomes.

See the 7 separate budgets presented below 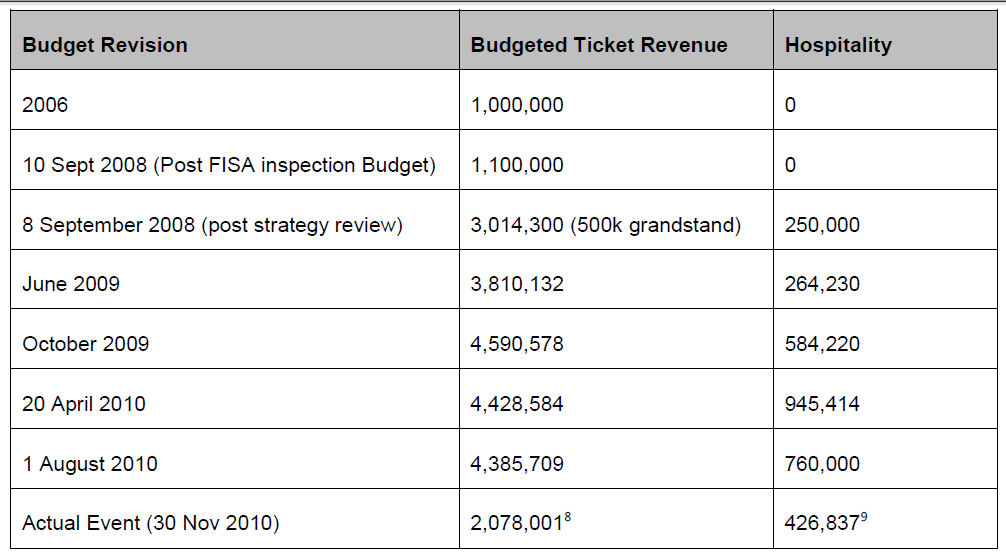 Areas of cost overruns, and wastage included FISA demands, supplier costs, overseas travel, management fees and expenses. [some overseas trips had expense claim mobile phone bills of $1,000 per WEEK – and nobody suggested getting a contract with a single communications provider].

K2010 did not appear to have a culture of detailed cost management, nor did it understand the bottom line impact of expenditure deviations. the focus was on delivering a world class event and there was a lack of commercial discipline and expertise applied to key decision making.

Interviews with Board and Staff

there was no reference made to poor cost management, inadequate analysis and reporting, lack of risk management or matters related to Governance….. a lack of understanding regarding the cost impacts on the financial outcome and a conviction that if they had achieved the sales forecast and the (shifting) revenue budget there would have been a surplus or break even outcome.

[Seems pretty obvious that nobody had sufficient financial experience on the Board].

The uniform reflection of those interviewed was the surprise that ticketing sales targets were not achieved and this was the reason for the loss… This clearly misses the key points that:

Financial outcomes are driven by both the revenue and cost side of the Event ledger – [doh!]

It is clear from the review that attention to planning occurred a long time after bid acceptance and there had been an element of ‘pitch and hope’ in Rowing New Zealand’s handling of the decision to bid and accept the Event hosting rights.

Positioning strategy – the ambition created by the Research and Analysis by Neil Gaught (Consulting) set the event up not as a rowing regatta or sports event but as an “exciting entertaining international event” developed around the hosting of the World Rowing Championships. [Neil Gaught is based in the UK – a chum of Tom Mayo, possibly?  And his website lists the World Rowing Champs as a client.]  Gaught’s report said

“capturing the spirit of our sport and the true essence of our nation in front of the eyes of the world we will set Karapiro 2010 apart. By seizing our opportunity to enthrall, excite and engage we will leave a legacy of influence for years to come.  A capital and financial legacy to Rowing NZ of 80,000 spectators and 40,000 on the sports future database.”

It seems that high level or conceptual marketing methodology was used to create a vision, of sorts, without any supporting rigour around the operational implications and commercial consequences (and risks) of having ambitions to ‘enthral, excite and enrich’. [ouch!  Looks like the tourism consultant was not experienced in sports events and the Board was swept away by the successfully-communicated vision which wasn’t practicable to deliver.]

Governance:There were many assumptions made by Board members – independent board members assumed Rowing NZ were experts in the relevant matters and Rowing NZ board members took comfort through the expertise of highly experienced independent Board members [each reinforced the others’ inadequacies and lack of experience.  And they publish the number of board meetings attended by each of the 12 members – the local Maori representative went to 1 meeting out of a possible 10.].

Ticket sales:  It is our opinion that K2010 Management was not prudent. Budgeting for 87,000 ticket sales / attendees based on reported potential interest between 83,00 and 106,000 residents is not cautious.

None of these events (Mystery Creek Field Days, Hamilton V8s and Warriors and Chiefs matches) is a reliable or wholly relevant comparative event to World Rowing …. these events are generally in major urban centres, in established venues, part of well marketed annual competition brands… and in one case it is a trade show rather than sports event.

[So assumptions were wrong and then revenue estimates were built on those assumptions].

Ticket Sales: they had a pricing strategy for market launch. Later in the selling process there were ticket bundling options and various combinations of ticket classes taken to market.

However… we consider K2010 lacked a comprehensive sales strategy including pre-planned market response tactics and did not have a full understanding of the impact of various sales scenarios on the bottom line financial outcome.

One month before the event they had only sold 32% of the tickets.

yet there was still rationalisation one month out… confidence that revenue budget would be achieved.

Budgeted Event Gate Entry revenues were $50 per person – they were actually nearer $35 per person.

If more tickets had been sold there would have been more hospitality revenue.

We have not factored that potential revenue into the above figures because the K2010 information recorded in relation to food and beverage is poor. It simply records amounts paid to catering companies and suppliers and it does not record sales revenue earned.

They mis-calculated capacity – as only 9,199 people (adults) were scanned into the venue on the finals days [since the area seemed pretty full it’s hard to guess where the extra 10,000 people would have gone to make up the hoped-for 20k attendance or the 25,000 ‘capacity’ figure K2010 stated].

The Event actually achieved 48.66% of hoped for revenues – see image below – [one month before the event, they had sold only a third of tickets.]

Tickets – of the 41,000 tickets issued …57% were purchased and 42% were [sic] “complementary” tickets requested by the management in a bulk batch to distribute.

There was no evidence of a cap or limitation on the number of complementary tickets.

Budgets It would only be appropriate to revise a budget if either an unforeseen major event arose, or the board competletly changed its strategyic plan and objectives. [obvious, really]

Posted on September 24, 2012October 28, 2020 by Ben Rodford
The big question facing anyone involved in sport at an international level is funding. The euphoric summer of… read more