There are a lot of great and scary places to row in the world. Today we feature an intrepid group who start to row down the Zambezi river tomorrow morning.

The Upper Zambezi has never been sculled down before; It flows for almost 1000 km through Zambia from the Angolan border to Victoria Falls. Zambia is a landlocked country in Southern Africa, approximately the size of France with a population the size of London.

The trip seems to have come from some wild speculation in the Canford School staff room; plus a clear charitable objective to raise £50,000 for Village Water and Rowing Zambia.  We are donating the Row Zambezi boats to the Nelson Mandela Township Rowing Project in Nemato, Port Alfred and to the Zambian Rowing Organisation which is developing junior rowing in Zambia’s copper belt.

The team members who know Rowperfect staffers include:

Read their blog entry for Sunday 24th July
Extremely busy few days in Lusaka getting ready for the Big Departure! As I write, the advance party led by Nigel with Julia, Jamie, Leo and Steve Chinhoi are in the Barotse checking out routes to the river; and the main party is in the air having just departed from Heathrow after having been safely sent on their way by expedition coordinator Jolene Wessels. Jana and Wilco arrived yesterday with our beautiful boats, covered in African dust but intact after the 3000km drive from Cape Town and through Namibia.

Zambian National Broadcasting Corporation have interviewed us twice over the weekend, and also played the Row Zambezi song “the smoke that thunders”, and interest in the expedition is growing.We have activated one of our yellow brick trackers now, and the Row Zambezi website has a live tracking facility (The Expedition). The truck, our home for the next 3 weeks, arrived today driven by Philip Phiri.

Pieter and Joey Labuschagne, our expedition medical team, arrived today from South Africa, and promptly dealt with their first casualty: Beatrix Cook who had a tummy upset. The Zambian rowing team arrived today too; Patrick Akayombokwa is the vice president of the Zambian Amateur Rowing Association and is going to row with us during the first half, accompanied by Mwenda Lupiya and Angel Mpeta. Patrick and Philip are both Lozi speakers which will help us through the Barotse. We had a long talk standing next to the boats and they will launch the press conference tomorrow.

We head north to the Copper Belt in the morning

Posted on March 3, 2011October 21, 2020 by Rebecca Caroe
We have a one month promotion on Dreher oars and sculls. Check out our web shop for prices… read more

Posted on January 18, 2013October 23, 2020 by Rebecca Caroe
Here’s your weekly opportunity to enjoy tales from others who also love rowing. This weekly round-up is for… read more 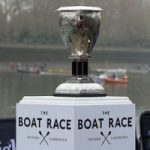 Posted on April 8, 2019October 13, 2020 by Tom Wall
Yesterday was Boat Race day. Woman and Men were racing the course. And we all know who won… read more