Duncan Holland writes:
I have already written about the fact that I noticed the similarity between the analyses of our Bumps crew after the race and those of a high-performance team after a Championship Regatta. Recently, I realized that there is another analogy that interests me anyway!

Are there similarities between the Bumps and Championship Regattas?

The Bumps involves racing four times over the space of four days. Each day the crew starts in a potentially new position based on yesterday’s results, theirs and their competitors’. This has some similarity to a championship regatta such as the Worlds where crews are faced by four rounds. Where the analogy is interesting is on the mental side, the mental preparation and reaction.

Before the first day there are hopes of triumph, and fears of the unknown. Can we win Blades or a medal, are we competitive? After the first race, there are some data, hopes may be alive of a triumph, there may has to be some reassessment, some re-alignment of goals to make them realistic. After days two and three the process continues, good performances bring added pressure and expectation, a poor one the need to re-assess. If things go well for three rounds then before the final race there is a crescendo of hope and expectation.

As a case in point; our crew (Champion of the Thames M5)  came into the Bumps with high hopes and some trepidation. On day one we went out after our best ever training session and rowed poorly to a relatively easy bump. Afterward, we talked, realized we hadn’t executed the plan and promised each other to do better the next day. The next day we rowed much better, followed the script better, and got a good Bump, well earned by our standards.

Now comes the interesting challenge; we can sniff a winning week, Blades are a possibility. We know we have to row as we did, we need to stay focused on the present, to stay in our own boat, to be patient. In fact, to execute all the sports psychology clichés that are familiar to us all.

This is where the analogy bites for me. I have spent a long time telling people to do these things, now I have to do them myself. I’ll let you know how we, and I, get on.
Duncan

One thought on “The Bumps: Just Like the Real Thing”

Posted on April 16, 2012October 28, 2020 by Rebecca Caroe
Over on RSR Alistair Pottswrites a long piece on what it was like watching the Boat Race from… read more 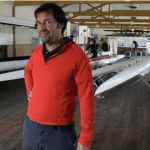 The art of rowing hard

How did Tyrian beat Rob Roy in Wyfolds final 2013 at Henley?

Posted on July 13, 2013October 20, 2020 by Rebecca Caroe
We got asked a question by Graham Did you see that the Tyrian crew that won the Wyfolds… read more