the Greek pair are visiting Henley for the second time this year accompanied by their coaach, Spiros Asprogerakas.  He is an assistant coach to the Greek national team and has been working for the past three years both with them and the rowing club at Saloniki – one of the top 3 in the country.

The pair is a new combination, Iannis Tsilis raced here last year but his partner Vasillis Tzaninis is new to Henley.  so far this season they won in Duisberg and came fourth in Bled at the FISA World Cup.

Spiros explained that there are six athletes that the Greeks are trying out in combinations before making selections for the World Championships in November. When Iannis and Vasilis go to race in Luzern next week, they will be in a double scull.  “It takes us a long time to decide crews – these six may be a four, a double or a pair – we don’t yet know.”

The Greek squad is missing its star performer Vasilis Polymeros as he isn’t in training (yet!) and so this year the squad is maintaining existing athletes and bringing on new youngsters.

I asked Spiros what he finds different about racing in Henley.  “I find everything different.  There is a unique atmosphere, no other place is as warm and close with the real passion of the participants and spectators.  I find the spectators very knnowledgable.”

“The town of henley is rowingly associated” he added, “usually we are isolated when we race but here it is at the centre.”

Hils Evans, the crew’s Henley landlady was on hand to add to the support as they went out to race – she has hosted them for the past 4 years and feels very passionately about the Greek rowing team. 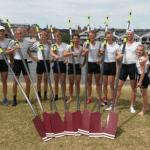 Posted on December 12, 2016October 15, 2020 by Rebecca Caroe
Earlier this week a press release landed in my inbox that took me by surprise. Henley Royal Regatta… read more

Exercise and mood – leverage the connection!

Posted on January 19, 2012October 21, 2020 by Rebecca Caroe
Are your moody teenage years behind you?  Or do you find that how you feel each day is… read more 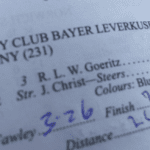 Henley Royal – the delights and the quirks

Posted on July 7, 2018October 16, 2020 by Rebecca Caroe
Reporting on a Royal Regatta which I have not frequented for several years gives the benefit of perspective… read more