This is a story about a very strong individual. Dan Lynch. Dan is a 58 year-old rower fighting a rare cancer diagnosis (Mantle Cell Lymphoma). He proudly continued to row through the last 18 month of his treatment. His erg is with him in the hospital.  Dan will row the Great Lakes challenge organized by USrowing. This challenge allows a rower to record the miles either by using the ergometer or rowing in a single scull on the water, as you virtually row across the Great Lakes. Rowers can begin recording their mileage on Wednesday, July 15, and will have until December 1 to complete The Row the Great Lakes Challenge. The Row the Great Lakes Challenge is open to all age categories and all levels of rowing. Register here. Read what Dan told USrowing:

Based in Litchfield, Conn., Dan Lynch started rowing in 2015. He is currently pursuing the “Longest Known Streak” of consecutive days on the erg, all while battling a rare, aggressive form of Non-Hodgkin’s Lymphoma. Click here to learn more about the Row the Great Lakes Challenge and meet some of the other participating rowers.

What made you want to participate in the Row the Great Lakes Challenge?
I was a little late learning about this Challenge but loved it the second I read about it. First thing that caught my eye was the word “Challenge,” but then when I saw that it was nearly 1.8 million meters over 140 days, well, how could I resist? It dovetails nicely with several other rowing goals I’m already chasing after!

How have you set your daily/weekly mileage goals? To accomplish the Challenge by the end date would require approximately 12,500 meters per day, every day. Since I was getting a late start, I knew I’d have to put in some bigger days to catch up to the top 10 guys in my 55-59 category, plus I’ll be in the hospital for much of October, so won’t likely be able to log as many meters at that point. I’m trying to bank as many meters as I can now, within reason, and while listening to my body.

Where are you based? And, are you completing your mileage on the ergometer or on the water? If your rowing on the water, what body (bodies) of water are you rowing on?

I’m typically based in Litchfield, Connecticut (northwest corner of the state), but have spent most of 2020 in the Boston area. As much as I’d love to add some meters on Litchfield’s Bantam Lake or the Charles River in Boston, I’m currently restricted by my doctors as to what I can do. They have made an exception for my erg, so all my meters for the Row the Great Lakes Challenge have been on my Erg, either in Connecticut or Massachusetts.

How long have you been rowing and how did you get involved in the sport? 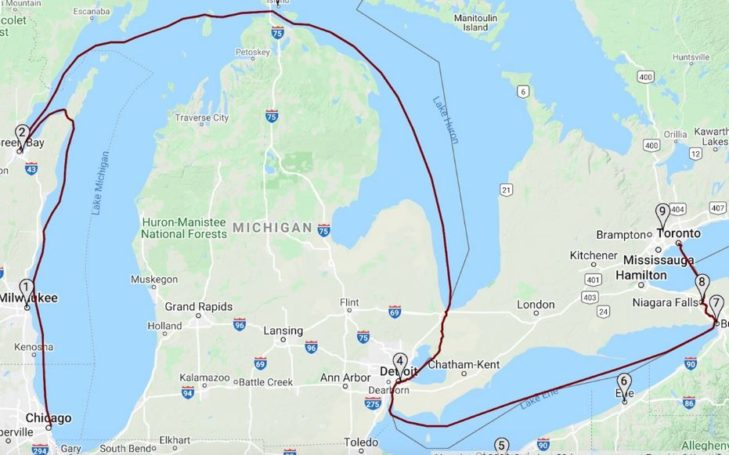 I started rowing on June 13, 2015, at the age of 53. A local team had an “Ergathon on the Green” fundraiser that day. My sister and I were walking by and stopped to watch briefly because we had never seen rowing machines, nor did either of us know anything about rowing. Kynan Reelick, coach of the Litchfield Hills Rowing Club, struck up a conversation and before the day was over, I had pulled my first 2k (an 8:31.5 classic fly-and-die), signed up for “Learn to Row,” and have been absolutely hooked on the sport and the rowing community ever since.

What about your rowing carreer?

In my short rowing career, I’ve been fortunate to win quite a few medals in a variety of boat classes, as well as at indoor competitions on the erg. I’ve rowed in the Head of the Charles Regatta twice (2016 and 2017) and coxed the Litchfield men’s four with coxswain in the 2019 HOCR when health issues prevented me from rowing.

Prepared for the Great Lakes Challenge

Late in 2018, I received a surprise diagnosis of Mantle Cell Lymphoma, a rare, aggressive form of Non-Hodgkin’s Lymphoma. Surgery forced me to miss the 2019 World Indoor Championships in Long Beach, but I did manage to compete and win a C.R.A.S.H.-B hammer in the lightweight 55-59 category.

Throughout August and September 2019, I rowed and/or coxed with the CRI masters men, while having daily radiation treatments at the Dana Farber Cancer Institute. It was a great way to start my day before heading to the hospital for treatments. Unfortunately, the radiation could only do so much, and so I began a five-month program of chemotherapy on Monday, March 2, 2020, the day after placing fifth at the C.R.A.S.H.-B.s as a heavyweight…

…..On January 1, 2018, I began to pursue the “Longest Known Streak” of consecutive days on the erg. The mark of 1,048 days is held by Canadian masters rower Stan Shatenstein. My diagnosis came on day 334, but I saw no reason to stop rowing, especially after all my doctors encouraged me to “remain active.”

My streak is still intact with over eight million meters rowed to date, and September 26, 2020, will mark my 1,000th consecutive day. I originally had something special planned to mark that day but am now making alternate plans since I’ll be in the hospital for several weeks receiving a Stem Cell Transplant. Just as I did during my chemotherapy treatments, I’ll bring my erg with me to the hospital. If all goes as planned, this record will come to the U.S.A. from Canada on November 15, 2020!

Posted on April 23, 2012October 28, 2020 by Rebecca Caroe
Dave Hudson works for Rowperfect running the office, shipping out all the things you buy from our web… read more

Should Parents encourage their children towards US University sports scholarships?

Posted on April 30, 2012October 28, 2020 by Rebecca Caroe
A parent’s perspective on University education overseas Peter O’Connor has two sons over at Harvard University so he… read more

Boat Lights – it’s autumn get your lights out

Posted on October 3, 2012October 28, 2020 by Rebecca Caroe
It’s autumn, evenings and mornings are getting darker and so lights on your boats are essential and part… read more