Recently I published a blog discussing the application of Malcolm Gladwell’s book Outliers to rowing, if any.  In it I mentioned the magic number of 10,000 hours of practice and learning that Gladwell had observed as a common factor of genius.  Is this applicable to rowing?  Is it possible to row for 10,000 hours in an athletic lifetime?

Using the biographical data on the FISA webpage brief calculation makes it clear – both Eric Murray and Hamish Bond had probably rowed at least 10,000 hours before there magnificent performance at the Olympics last year.

Looking further afield the Guardian paper of the U.K. has a marvellous spread sheet available that is a positive mine of information and it yields the following:

I don’t have data on when they stared rowing for all the rowing medallists (or to be precise I haven’t gone to the trouble of getting it!)  but it would be fair to assume that most of the medallists had been rowing at a good level at least since they were 20.  This certainly makes 10,000 hours of training very much possible.
The implication is plain – Miles Make Champions!  I have quoted this before and will no doubt quote it again.  Volume in training pays off. If you want to row fast then the basis is simple.  Go out and row a lot!

View all posts from Duncan Holland

The Negative Effects of National Squads on Club Rowing

Posted on June 6, 2016October 23, 2020 by David
Today, we have some very interesting insight from Craig Allely of Rotorua, New Zealand into the effects of National… read more 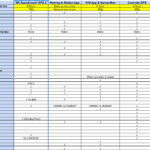 Posted on February 8, 2018October 14, 2020 by Rebecca Caroe
We got a question from a reader about comparisons between rowing speed measurement tools RIM vs Coxmate. Which… read more