Within your sporting career there are big stepping stones where you have to jump up in quality to get the next grade.  Rowperfect asked Nicola Coles an Olympian and former World Champion in the womens pair how she faced and overcame these moments in her career. Read Interview Part 1

What should coaches do and say to encourage this attitude in their athletes?

In my situation it was actually about what my coach didn’t do and say – he didn’t even give me the time of day because I wasn’t working hard enough and so I actually got the message loud and clear.  That was when I realised that when I gave him the respect he deserved, he was going to give me the respect I wanted.  When I worked my guts out for him he started to coach me.  It was tough love – he ignored me until I worked harder.

There’s a fine line between “namby pambying” an athlete to support them through the hard times and being tough.  If they don’t want it bad enough no amount of pussy footing around and being lenient with them is going to make them do it.  You can lead an athlete to water, but if they don’t really want it you can’t make them row hard!

I got dropped from the NZ squad in 2003 and I knew that to fulfil my Athens Olympic dream I needed to convince Rowing NZ that they should send me to the “Regatta of Death” (Luzern Olympic qualification regatta in 2004) but I didn’t even have a pair partner at that stage.  I knew I didn’t want to give up and the crew that had been sent to the Worlds in 2003 hadn’t gone fast enough to gain Olympic qualification.  I still felt I was good enough to get to the Olympics and Juliette Haigh’s coach rang me and invited me to train with her at her club, West End, and give it a try.  She had just done U23 World Championships, coming 5th in the pair and so I was keen.  I thought about it for about 2 seconds and said ‘yes’!

We met in October 2003 and we trained until Trials in March 2004…. I knew we had to go faster than the other pair that RowingNZ had selected – we were looking at them but we needed to be better than them.  We would watch the 2003 world champs 2- A final on video over and over again, day after day. We thought the girls in the final were no bigger and better than us and I’d raced them before in the eight.  I felt we truly belonged in that pack…we tried to work out what they were doing to move pairs fast that we could try… get our catches in quicker  and have a more aggressive drive.

So Jules and I basically focused together on this.  We had an awesome summer at West End with Jules’ coach John White.  I also tried to remember everything Dick Tonks had ever taught me in the previous years that he’d been my coach.

As we started ticking off the goals as we achieved them and we really started to believe we could do it and go all the way.

It all worked! They selected us and we qualified at the regatta of death.

We ended up making the A final at the Athens Olympics and came away with 6th place.

Do we believe we can win gold? 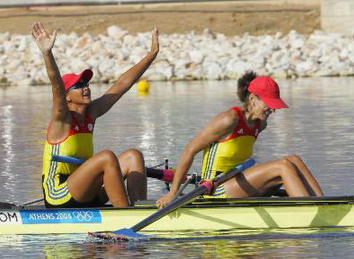 picture: english.people.com.cn][/caption]and so we did what he told us and really believed too… and we did win gold.  We were lucky enough to be training with Dick’s other crews, George Bridgewater and Nathan Twaddle in the 2-, the Evers-Swindell twins in the 2x and Mahe Drysdale in 1x – awesome training partners….

At that stage the crew that we aspired to be like was the Romanian women’s pair who were the Athens Olympic Champions.

When you plateau – what helps keep you going?

I guess there needs to be a culture of never going backwards.  My first coach Brian Hawthorne always used to say to me “Never go backwards” and “Take more risks”.

To get over a plateau you need to take risks and push your boundaries.  Back when I was a club athlete and wanted to get into the NZ team I decided I needed to start doing weights so I got a good trainer who thankfully taught me lift to failure. If you are not doing this you are wasting your time in the weights room… it hurts and it really sucks going to failure.  You need someone to support you though that physically and mentally.  It’s OK, you aren’t going to die and you haven’t actually failed.

He made me put myself through that pain and it’s a real mental thing.  He taught me to fail on the first set of lifts.   So for three sets of 10 you’d die on number 8 on the first set and you needed help to do the last two lifts every time.  If you can do rep number 8 you need to put more weight on the bar.

That’s why Rowing NZ takes athletes right to the limit.  It’s controversial because if they aren’t getting injured they aren’t working hard enough… they need to be right on the knife edge.  Obviously part of Dick Tonks’ skill is that he’s watching all the time while he’s pushing the limits.  Because you have to be so careful, but Dick’s a very intuitive coach, he is extremely clever at reading his athletes… we had this session called “repetitions” which was one minute at race pace and one minute off and sometimes we’d go for two hours.  We thought 3 sessions in a week was a lot until one week we did it every day twice a day for 6 days!  That really pushed my limits!!  We broke the course record in Amsterdam the next week….So that’s how we got some of our results.

Read Part 1: Nicola Coles interview – Getting to the next level in rowing

Posted on July 1, 2013October 20, 2020 by Rebecca Caroe
Fronting a fund raising dinner for the Eton College Boat Club and parents, Debbie Flood was both the… read more 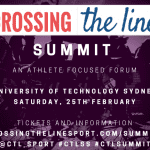 Athlete Retirement – a topic YOU need to understand

Posted on February 6, 2017October 14, 2020 by Rebecca Caroe
Crossing the Line Sport Summit 2017 Under 3 weeks to go! Our Sydney Summit is our second athlete-led forum. We… read more