Given the planned limitations at the next Olympics( a single men’s and women’s lightweight event), is there any hope for the future of lightweight rowing?

And we also saw a detailed Reddit thread started by “Fat Sculler” aka Daniel Spring (the blogger) with your question – here’s his answer from an email exchange. 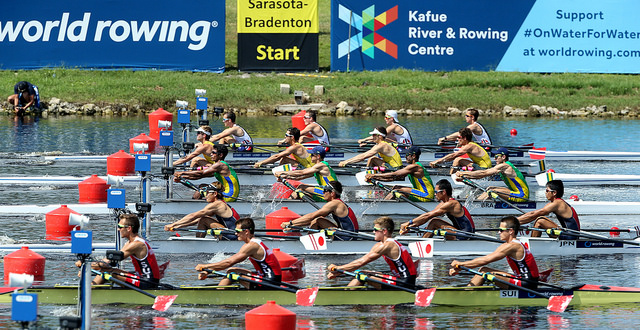 It’s a good and very valid question. From the perspective of the Olympics I don’t think the lightweights have any future. There was an interview this week with FISA President Jean-Christophe Rolland (link above) where he pretty much said the same thing.

I do not expect any lightweight events to feature at Paris 2024.

However, do I think this spells the end of lightweight rowing? Possibly not. We have to remember that before the lightweight events were included in the Olympics they had a thriving programme at World Championship level. It’s entirely possible that post Tokyo the lightweights could see something of a renaissance without the “burden” of the Olympic programme.

The crucial factor (as always) is funding. For the big nations like GB, NZL, GER etc who’s funding is entirely targeted towards Olympic medals the Lightweights may become something of a sideshow (with perhaps only 1-2 boats being maintained). But for the rest of the world it could be seen as a way of truly competing at a World level. You only have to look at the large entries in the likes of the LM4X and LW1X/LM1X to see there is definitely a demand for the events, particularly in South America and South East Asia. The challenge for FISA is to work with the established nations to ensure that demand is maintained.

Where I do see a threat is for lightweight sweep. The removal of the LM4- from both the Olympic and world championship programme does pretty much mark the end of sweep for lightweights. The small entry in the LM2- also shows this is on the way out (as I understand it the GB LM2- won’t run in 2018).

And so do Lightweights have a future post Tokyo 2020? Yes, definitely – but only in sculling, and only if FISA work hard to maintain the interest.

Posted on July 31, 2008October 29, 2020 by Rebecca Caroe
The Rowperfect team has been working hard to get you some exclusive content and commentary about the forthcoming… read more