We’re introducing a new section: Drills and Exercises for Rowingwhich will be a ready reference for coaches describing the exercises, their purpose and how to do them.   We’ll also be giving tips as to best practice and suggesting variations and extensions as your crews get

Before we introduce this we found that we’d already made some assumptions about how you would use these.  They are that you will:

On the water we also assume that you have chosen a place where the water is relatively still and calm, with little or no traffic and where you can get close to the crew so that they can hear your descriptions and see your demonstrative gestures.

We recommend that you build up to doing the exercise with the full crew.  For example if you’re coaching an eight start in fours, move onto sixes and then into the eight together.

We think it’s important to follow the exercise session with some steady rowing with you and your coxswain both focused on the aim of the exercise and giving feedback directly related to that.  Be demanding but also react strongly to whatever is done well.

We expect the changes to be tested under different conditions: try the same actions at different ratings to see how much the change endures the closer you get to race pace or in rougher water, with the wind, against the wind, with another crew alongside . . .

We don’t expect all of this to be done in one session.  This could take a week or longer built into your training programme, every day adding to the degree of difficulty, building skill levels.  Allow time for the crew to develop.  Trying to cram it all in means that the change isn’t complete, the boat doesn’t respond as well, the crew loses sight of what the exercise is for and then won’t be able to hold onto its effect in normal rowing or under challenging conditions. 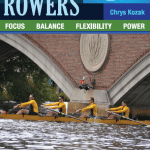 Posted on August 9, 2018October 21, 2020 by Rebecca Caroe
I am a masters rower and find it extremely hard to get into full compression. My coach just… read more

Posted on December 20, 2010October 29, 2020 by Mohit Gianchandani
We started with a biweekly podcast update for ‘Lightening Talks 2010’ late November where we put up recordings… read more