I was frustrated just watching the live updater from FISA and the results service . Doesn't really give a good view of what 'really' happened in the races. You can't see if soneone is just cruising ahead of the pack or really sweating to make the times published.

Anyway, several countries are plugging their team results pretty hard online. Makes it easy to see which crews they think stand a chance of making finals.

Australia – Interviews with Performance Director Andrew Matheson who reviews the day's results Probably one of the pleasing things with them is that there are a few things they can work on as well. and coach Tim Conrad

Great Britain – a 'confident' start according to official sources. M2- won their heat as did Alan Campbell M1x in a storming time. Why win with such a huge margin? Does it show the opposition how fast they need to go to beat you?

Canada – their fancied crews include the mens pair… although it sounds like they haven't done a 2k race together yet (!)Love the headline Canada places third in day one of World Rowing Championships – made me think their crews were third out of ALL the countries. LOL.

New sites to follow @iwomensports Twitter following women in sport. And for other countries @infosportNZ , @usrowing and @ausrowing all prolific with information updates and links to good sites.

The opening ceremony was an 'unique' event and fascinated the Row2k blogger Oli Rosenbladt.

The 'tandem rig to end all tandems' was spotted by row2k

We saw a rig today that looks like one of those jokes you sometimes make when there's time to kill at the boathouse; one of the adaptive 4+ is rowing a double-bucket: stern pair both on starboard and bow pair on port. We'll definitely post photographic evidence of that one when we get it, for sure, and for those who are wondering, yeah, the boat was actually not moving badly.

Twins and Siblings rowing at the Worlds 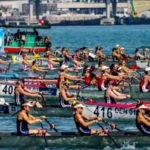 Posted on August 10, 2020May 18, 2021 by Bryan
The Irish Rowing Championships and Coastal Championships, both events got cancelled due to public health restrictions. The races… read more

Posted on May 9, 2011October 28, 2020 by Mohit Gianchandani
After the intensive trials, New Zealand and Australia announce their pick of athletes for the 2011 World Rowing… read more