Richard Chambers has written another installment from Beijing.

Thanks to the Guardian.co.uk for hosting his blog. Richard's blog link.

I have just looked at the Olympics countdown clock on my computer and it is no longer counting the days. I've had the clock on my screen for the last 200 days and to see it so static and still is making me sweat. The last time I wrote, just before leaving the UK, was little over a week ago but it seems like an age. Since then we have travelled to China on business class (well somebody has to do it!) and begun the process of acclimatisation and tapering.

Upon arriving in China we were warmly greeted by friendly faces and humid weather. The Chinese are amazing, they will do anything for us and are willing to help in any way possible. It's been great so far. We've even had evening drinks with the British ambassador – although when I say drinks I mean apple juice and plenty of water – and we're ready for our first race tomorrow.

The British rowers are not staying in the Olympic village for the first week of competition. Our well-organised management staff have got us accommodation next to the Shunyi rowing course , which will be a significant competitive edge. But we have visited the Olympic village, which was something else. There is more security than Fort Knox but once you are inside it is phenomenal.

To be honest I didn't know what to expect, but the Chinese have really spared no expense. There are games rooms, TV rooms, gyms, swimming pools and so much more. But what I really want to talk about is the food hall. Wow. It sits 6,000 and has so much food there that not even our heavyweight men could polish it all up. With food choices from Asian to Mediterranean I didn't know where to start, so I had a bit of everything. Stuff being a lightweight for an hour!

The Shyuni rowing course is very much like Dorney only a little bigger, and training on the course has been going well. But after being out here for a week now we are itching to get racing: we have done all that we can in our crew to put ourselves in the best possible condition – now it's up to us to perform.

Our draw came out on Thursday and we are going up against some tough opposition but who said it would be a walkover? All of our races from the heat to the final will be gut-busters. To be honest the mood in the four is sometimes tense but that works for us, it means we know that something big is coming up and feeling nerves is a good sign. All the years of training will come into play in the next week or so. We want to make the most of it and I'm sure we will. We are ready to race.

Posted on December 15, 2016October 15, 2020 by Rebecca Caroe
Fatsculler reports FISA announced the final two proposals for changes to the Olympic programme for Tokyo 2020. The… read more 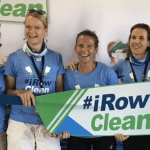 Posted on May 9, 2018October 13, 2020 by Rebecca Caroe
The rules of rowing racing can seem fixed to many competitors in domestic competition but at the international… read more