I’ve read Rowing Faster and Biomechanics of Rowing, and will soon be reading The Complete Book of Rowing. What other sources are there for rowers, particularly those focusing on technique both on the water and on the erg?

What do you want to learn? There are two categories of rowing books

The two that you’re focusing on right now are How to row books. Trouble is, if you don’t already row these can be hard to

Because I was lying under the bow-canvas, I became the first Briton to win an Olympic rowing gold medal since Richard Burnell in 1948 (& the first GB cox since 1912!)

digest. But I’d add to your list Gordon Hamilton’s Rowing in a Nutshell and if you’re a masters athlete, Marlene Royle’s Faster Masters rowing course (online video and ebook learning in 7 episodes).Harry Mahon wrote a summary of the rowing stroke cycle which accompanies the DVD of his technique which is almost complex in its simplicity.

The rowing stories are huge fun and range from epic adventures to personal tales… there are many. I adore Barry Strauss’ Rowing Against the Current (on learning to row at 40). Martin Cross’ Olympic Obsession details a story per chapter from the giants of the British rowing scene in 70s and 80s.

Two books telling the same story – Assault on Lake Casitas (Brad Alan Lewis) and The Shell Game (Stephen Kiesling) tell the 1984 US olympic selection trials story (and David Halberstam’s The Amateurs does the same). More recently published 6 Minutes in Berlin (Michael Socolow) and The Boys in the Boat (Dan Brown) tell the story of 1936 Olympics – one from the point of view of the broadcast radio commentary and the other more about the athletes. Note the more popular book is full of historical inaccuracies but it’s a great tale and now a movie.

And a personal plug for my website Rowperfect where we answer questions about rowing, technique, coaching and we have a particularly strong section on rowing drills and exercises to learn blade handling skills and boat moving skills.

Lists of rowing books curated by others 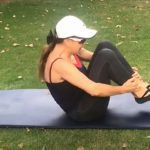 Pilates for Rowers – The Catch

Posted on April 18, 2020October 14, 2020 by Tom Wall
We got this question two weeks ago from a Deborah in London. Tom, are there exercises available, that… read more

The Sculler – a rowing novel

Posted on September 25, 2018October 15, 2020 by Rebecca Caroe
Rowing stories need a ring of authenticity – you know when someone has experienced what they are writing… read more