Xeno blogs on Row2k as he watches the heats and gives his view on the wide range of different techniques.

Rowing technique at the Olympics…

During Sunday's heats I observed different rowing styles and focused a bit on which crews connect through the heels or the balls of the feet at the finish. Which of the two is more efficient, that question I leave open.

Heat # 1: Dutch women connect with the heal at the finish, lower backs are supported, bow of the boat stays up. However one side note, the Dutch break the arms very early in their acceleration which defies the anatomical "law" of skeletal strength being stronger then muscular strength. When rowers break their arms early, they limit the power of the legs and lower back to the pulling strength of the arms, which is far inferior. When using skeletal strength the rowers suspend from straight arms, relaxed shoulders, forward body angle, supported lower back, and driving from the gluts, quads, and hamstrings.

Heat #2 has the Canadians in lane 3 and the Germans in 4. The German crew are heel pushers, whereas the Canadians crew are toe pushers. The knees of the Canadians pop up during the final phase of the finish, which "absorbs" the draw of the handle to the body. This in turn puts more weight on the seat at the finish, which pushes the bow into the water. The Canadian crew, in comparison to the Dutch, does a far better job hanging of the arms during the leg drive. The German double has a typical German-early-opening of the upper body during the leg drive. The Brits in lane one do a really good job hanging and driving of the legs and supporting their lower back at the finish. In the last 250 meters, the camera swoops over the crews and you can see how well connected the Germans are through the finish.

Heat #3 has the Chinese rowing fast with their knees popping up at the finish, yet their lower backs stay supported… how that is done, I have not figured out yet. The stroke woman has some quirks in her acceleration, knees come apart, she ducks her neck and makes the stroke look more like yanking. However her partner has quite a fluid power application.

In the first heat of the men's lightweight double scull the stroke of the British crew sculls very NICELY. At the end of that race, I noticed that the GB lightweights were given blue cooling jackets.

That is it for now. Xeno Muller 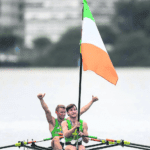 Two brothers in a boat went to Rio

Posted on September 23, 2016October 20, 2020 by Rebecca Caroe
Republished with permission from HearTheBoatSing blog by Greg Denieffe: Photo credit: Irish Examiner A long time ago, in a… read more

Posted on August 15, 2008October 23, 2020 by Rebecca Caroe
Jochen Kuehner in the German LM4- finds an untimely end to his regatta. It isn't possible to race… read more

Posted on August 2, 2008October 29, 2020 by Duncan Holland
Duncan Holland writes: I wrote a couple of days ago about how rowing clubs should look after talented… read more