When starting this feature linking to Olympic rowing bloggers, We had not intended to include non-athletes. But Xeno Muller i s giving an expert and excellent commentary on the mens singles event at the Olympics hosted on Row2k We think this warrants inclusion.

To see his earlier posts, search on the category from the Categories column on the right.

Drysdale is sick… is the opening ceremony to blame?

As an Olympic athlete you seek to control your workouts, your food intake, your rest, who you spend time with, pretty much everything that can be controlled. Some situations can not be controlled, but can be avoided… such as the opening ceremonies.

I have gone to three Olympics and attended none. I enjoyed watching the events on TV. In 1992, not going to the opening ceremonies was upsetting. The coaches gave us several good reasons. First the rowing venue was over 100KM away from Barcelona's Olympic stadium, the commute would take forever. Second, the single scull heat was in the morning the next day. Third, may as well be the most important reason, the need to avoid people and their potential germs. You never know what germs other people carry. At the Olympics not everyone is set to win a medal and therefore are not as worried with their health and hygiene.

I watched the Atlanta and Sydney opening ceremonies on TV. In 2000 at the Australia Olympics, I had a strange nightly cold, which did not help my final five hundred meter sprinting ability for the gold medal. It is possible that I would have been worse off, had I gone to the opening ceremony. At one point all athletes ended up standing under a huge tarp, for quite a WHILE. I was told by some of the athletes who had gone that the smell underneath was pretty bad….

Last Friday, I watched the opening ceremonies… I was excited to see Drysdale carry the New Zealand flag into the stadium. It was awesome that a rower had that honor. Drysdale marching in on camera reminded me that the opportunity was presented to me by the Swiss Olympic team in 2000, and I declined. Drysdale, like me, had a race the next morning and must have known that a full nights sleep before his heat was not going to happen. He had no trouble winning his heat. No matter what, you want to conserve energy at all cost for that one week in your life… (I made a mistake in Australia, after my semifinal win, I felt oddly exhausted, but still was convinced by the team manager to give interviews. That was a terrible mistake and to this day I remember it. It took me several hours to get a normal resting heart rate and this may have cost me 0.5% of power and the gold medal…)

As for Drysdale, he started throwing up on Sunday night and lost 8 pounds between Monday and yesterday's semi final. Now we know why that semifinal unfolded in such a bizarre way. When he got sick we don't know exactly but staying up from Friday to Saturday may not have been the best choice. I will keep my fingers crossed so that he comes back to full power for his 2k on Saturday. I want every athlete to be able to bring his best, because only like that will everyone be satisfied with the outcome.

Here is the link to the NZ PRESS article :
Xeno Muller 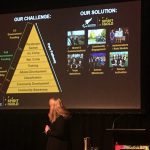 The Pathway to Paralympic representation

Posted on September 21, 2017November 2, 2020 by Rebecca Caroe
Rachel Froggatt from Paralympics New Zealand talks about how the pathway from community awareness of sport participation for… read more

Tom James has his say

Posted on August 14, 2008October 23, 2020 by Rebecca Caroe
Guin Batten, former Olympic Silver medallist, is out in Beijing working for FISA. She has sent us an… read more