When you watch a golfer hit a shot many times they look down at their divot which they use as guidance as to what did or did not happen in their swing. When rowing I suppose our”divot” is a puddle. Can you read much into a puddle? Does such a thing as a perfect puddle exist? What if anything should you be looking for? Shane Flynn
Shane – you ask a great question. 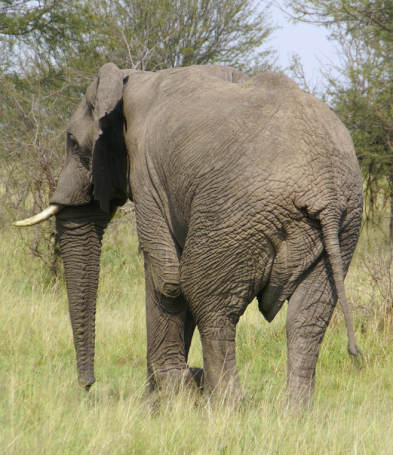 Why a rowers puddle is like an elephant’s rear end. Image Credit: Tanzafari

I have heard physicists say it doesn’t make any difference whether the blade moves water or stays locked and moves the boat only the force generated is the same, and thus, a washy puddle is not a problem.

I have however always coached for a deep swirly puddle.
I believe that when a rower puts the blade in on time and cleanly, applies a lot of force to the handle, and then extracts cleanly and neatly the boat will go faster.  This kind of rowing gives a deep, swirly puddle as opposed to a small or frothy one.

Froth is good for beer only.

The Dutch say that a puddle should be like part of an elephant’s rear end; deep dark and nearly bottomless.

Coaching by looking at puddle size.

Comparing puddles between rowers is particularly useful in an eight.  With a row of four puddles it is relatively easy to diagnose differences between power and connection from seat to seat.

Posted on May 19, 2015October 22, 2020 by Rebecca Caroe
One of the most dangerous problems in rowing is the failure of athletes and coaches to make sure… read more

What exercises will make a novice into a stronger rower? by Duncan Holland

Posted on February 7, 2015October 28, 2020 by Rebecca Caroe
Cross Training We got this question from Kiera “I’m a new rower and I compete in school regattas.… read more

Posted on March 29, 2015October 28, 2020 by Rebecca Caroe
This book is brilliant: it’s what all club officers should be considering when choosing and deploying coaches to… read more