Here is the latest video uploaded from Nick Garratt – Nick coaches at Mosman in Australia and is very generous sharing the video he shoots of his athletes.  What I love is that they come un-adorned.  They are normal athletes trying to go fast in boats and so are good models for club athletes elsewhere.

When videoing rowers 4 things to check

If you had taken this video – what points would you raise with your athlete on things he could improve?

When analysing video there are two ways to do it – tell the athlete what you see or ask them what they see and would like to change.

My questions to the athlete would be: 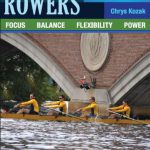 Yoga for Rowers – your own yoga classes

Posted on July 9, 2019October 28, 2020 by Tom Wall
How wonderful. A Yoga book for the rowing community. Yoga for Rowers Yoga for rowers is the first… read more

Posted on October 11, 2018October 13, 2020 by Rebecca Caroe
WorldRowing just published this article What Rowing Force Curves reveal about rowers – it  is so beneficial for us club coaches… read more