The Cancer Research UK Boat Races are amongst the oldest sporting events in the world. This year on Sunday March 27th the Championship takes place on the River Thames in West London once again. There are two different races; The Women’s Boat Race at 3:10 pm and The Boat Race at 4:10 pm. The Boat Races are an annual contest between two rowing crews from Oxford and Cambridge Universities.

You can watch the races for free on either side of the river. Here are some tips of particular areas: Putney Embankment and Bishops Park (at the start); Hammersmith and Barnes (mid-course); Dukes Meadows and Chiswick Bridge (at the finish). It’s a fun event, check out the timetable to make sure you won’t miss anything. If you don’t have the possibility to be there and watch the races live, watch it on TV or online!

Every year, Hunter creates the Official Boots for the Oxford and Cambridge University Boat Clubs, worn by competitors in training, as well as immediately before and after the race. The boots are produced in the team’s rowing colours with their emblem on either side of the boots, marking their official status for the competitors in training. These boots are priced at £100 and will be available to buy at Hunter’s global flagship store on London’s Regent Street and on their website. 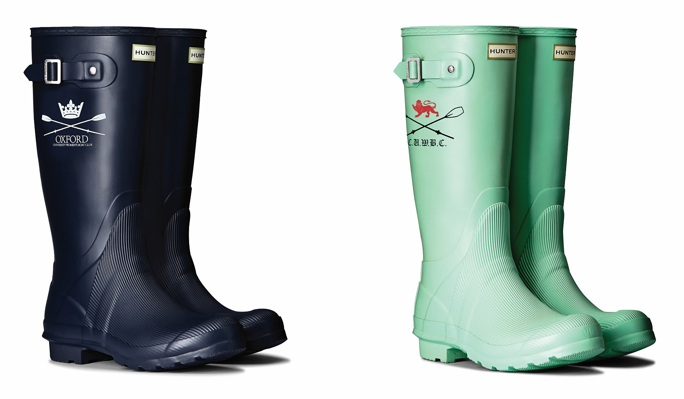 On the weekend of the boat races Hunter’s Regent Street flagship store will be turned into a Boat Race Hub showcasing updates from the boat race alongside exclusive interviews with rowers, in particular Lance Tredell and Maddy Badcott who star in Hunter’s ‘Everyday Pioneers’ campaign. Lance (Cambridge University Boat Club) and Maddy (Oxford University Women’s Boat Club) are two dedicated crew members in The 2016 Cancer Research UK Boat Races. Watch the video below!

Posted on March 20, 2014October 22, 2020 by Tobi
Whether you’re training for your very first rowing race or towards the Olympic Games, choosing great nutrition is… read more