James O’Connor – Rowing for Harvard as a foreign student

James comes from a very rowing-influenced family. With Father Peter, being a keen rower from his high school years and now a coach at Christ’s College, Christchurch, New Zealand. After partaking in many other sports through his school years, James, even though he didn’t think it was a huge influence in his life, followed in these footsteps as well as his two older Sisters and his older Brother, who also took up the sport at high school too. Once he had tried it out, and began making friends, he was hooked!

From then James’ rowing career sky rocketed. He rowed for the standard 3 ½ seasons at high school starting at the end of 2003/start of 2004. After having a breakthrough, with a highly successful rowing season in 2005/2006 winning the national schools championships in multiple boats meant that James and a bunch of others from the team were invited to trial for the New Zealand junior team. Being very successful at trials James managed to be selected in the 2006 junior men’s 8+ to race in Amsterdam. The training period started off with the boat going pretty poorly, but weeks of hard work resulted in them winning gold at the junior world championships.

As James was still eligible, due to his age, he was able to compete as a junior for another two years, which allowed him to go to Beijing in 2007 in the 4+ (4th place) and in Linz/Ottensheim in the 8+ (2nd place). At the end of his high school career, James continued to row for Christ’s College as a club member, but was then selected for the Regional Performance Centre’s (RPC) to train and race with at their national club championships. After injuring his back quite badly, with one disc in his lower back rupturing and another one bulging, he had to take the following season off rowing. However he continued being involved with the sport by coaching at Christchurch Girls High School where his crew got the bronze in the girls lightwwight 4+, and assisted at Christ’s College.

James then began training the following winter with Avon Rowing Club which got him back in shape before heading over to the states to row for Harvard. James is currently at Harvard and has rowed there for two seasons so far, and has plans for two more seasons before graduating.

James hadn’t considered going overseas for university until the end of his last year at high school. After their success at the 2006 junior world champs, he was approached by a couple of scouts from American colleges who were at the event. He was put off the idea when he heard a speech to the NZ rowing team that applauded senior national team members who had turned down scholarships to the United States.

For James, rowing for NZ is his dream.  He had enrolled for university in NZ, after taking a gap year to work in order to avoid debt during his University years. After seeing the potential that the States had to offer; as his brother was already studying there, he also began to apply to study in the States.

The first step is to take the SATs exam while at high school. James did this because his brother was doing them and basically dragged him along too – which James is thankful for.  James had a couple of recruiting trips to different US schools (universities) before deciding to apply to Harvard. He chose Harvard because he really liked the coaching staff, the fact that his brother was there made it an easier decision, and because they offered a really good financial aid package to assist with tuition fees. James then began his freshman year in August 2009.

Getting Information about Scholarships

James didn’t use a recruitment company when looking to apply for US Colleges as he had received most of his direct information from coaches after getting in contact at the Junior World Champs. Then he emailed them, and they sent him information about the college and how to apply. To gather more information James went to team websites to get contact details. James was lucky enough to have an older brother at Harvard, so he was able to ask a lot about his experiences. Coaches were also pretty honest about different schools, with a natural bias towards their own, of course!

In terms of information about the school, most of that was provided once he had contacted coaches. In terms of comparing universities to each another, James looked up a bunch of online polls on Row2k.com comparing universities, looked at rowing results, compared his interactions with coaches, and compared the accounts of people he’d contacted over there in order to form his decision on where to apply.

Pros and Cons of Rowing for an Overseas University

The only real tough decision for James to make was taking the pros and cons of sport scholarships and financial aid packages to decide which was best for him. Sport scholarships pay for everything as well as extra assistance with books, travel etc, but the scholarship can be taken away if you under-perform, get an injury or just decide you don’t want to play anymore. It also takes up more of your time for training and less for studying. The financial aid package which James is on, is available to all students, athlete or not, but you can only apply for it after you are admitted to the school. This allows James to focus on his studies without feeling guilty about his rowing commitments.

“The most important part of this process is getting in touch with a coach.  They are the ones who will help you get your foot in the door, will give you all the information you need, will tell you what they require and let you know if you’re scholarship-worthy, and will help you with the application process.”
advice from James which he cannot stress enough.

Recruitment Advice for you

James also suggests that if you are unable to go somewhere that you know a coach/scout will be (e.g. Junior World Champs, big U.S collegiate regattas, etc.) then most of them will have contact details available on their college’s sports website. If you don’t know which colleges offer rowing over in the States, a good place to start looking would be at entries at the IRA (rowing nationals), Eastern Sprints (east coast champs), and Pac-10 (west coast champs) regattas. Once you know which schools offer the sport, the next step is to Google search their college rowing or “crew” website. From there you should be able to find coach contact details or athlete interest forms to fill out and get in touch with someone. 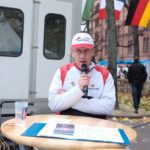 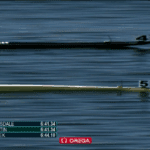 Posted on August 1, 2011October 23, 2020 by Rebecca Caroe
In the UK after the serious part of the rowing year ends, the fun regattas begin. And most… read more