Usula Grobler is both new to rowing and is coached by Carlos Dinares, an avid RP user.  She recenty broke the C2 indoor rowing record for 2k by a massic 2 seconds.

What we found interesting was what they left out of the text, such as (our words in italics)
World Rowing: Do you use the ergo much in training?
Ursula Grobler: I have only rowed six times on the Concept2 erg since September. because I only train on the Rowperfect and in the boat.
World Rowing: What did you feel like at the endof the race?

Ursula Grobler:  I was happy it was over. This erg hurts my ribs and messes up my timing at the catch and my coordination on the water because a C2 is not a rowing simulator it disrupts my technique

World Rowing: I understand that you are trying for the US team. Is that avenue now open to you?

Ursula Grobler:  I have my citizenship papers in process. I’m excited to have the support of the USRowing coaches. My coach will build our Olympic crew from Seattle, from his basement with his own system. [Which involves detailed technique coaching and training on linked Rowperfects and force curve analysis to align the two athletes’ power]
Congratuations to both Ursula and Carlos.

Posted on July 28, 2015October 28, 2020 by Rebecca Caroe
Dealing with groups of humans means you have a Pluto. Big group. Small group. Doesn’t matter. There is… read more 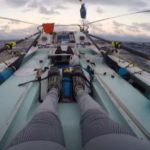