Although often thought of as a “pulling” sport, in fact, rowing is much more dependent on the “pushing” forces of a rower’s legs. To demonstrate this, SAS, the Official Analytics Partner of British Rowing,  invited double Olympic champion Helen Glover to row in an indoor practice tank rigged with sensors on the oars and footplates. As Glover was rowing, SAS collected and analysed data to visually illustrate each stroke and show there is always an opportunity to improve performance, even at the elite level, by highlighting inconsistencies, strengths and weaknesses. 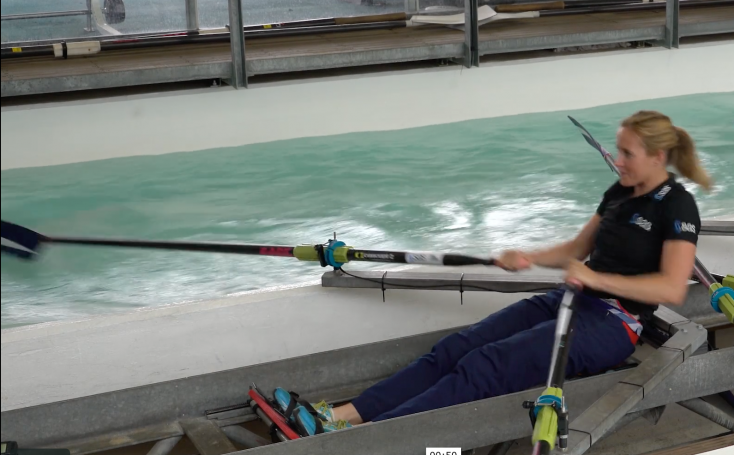 The SAS Institute kindly provided additional insights by giving us summaries of the force curves taken from the bowside and strokeside oarlocks. (I’m guessing Port and Starboard on the images as P and S).

These compare “David Smith” – presumably a local athlete – with Helen Glover – presumably the “Olympic Athlete” in the key.

This first graph shows David in blue against the Olympian in gold plotting Gate force vertically against Gate angle horizontally.

Apart from the obvious consistency delivered by Helen compared to David, the main insight I take from this is from the lefthand side image where you can see the blue plot has a lot more dots on the right (around the finish) than the gold.  This is typical of beginners who carry on holding the oars under the water and often leaning back as well while not actually continuing to accelerate the oar in the water. 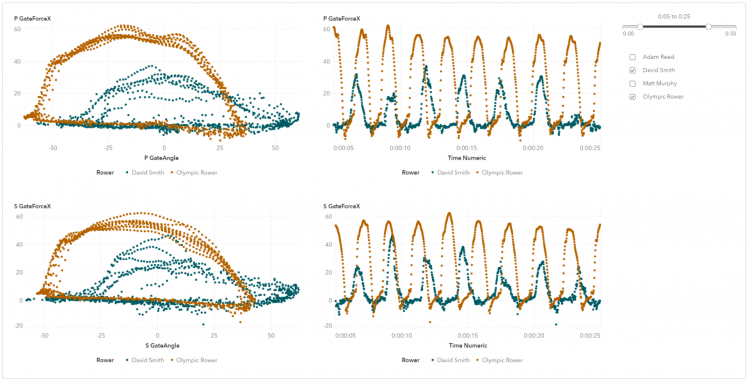 An easy way to help athletes see they’re doing this is to loose the shoe straps so their feet come away from the foot stretcher and then tell them to time the extraction based on this – tap out the finish when your feet get disconnected.

The next graph shows the acceleration of the movement of the oarlock against the angle of the oarlock.  Here, again there’s a longer stroke on both P and S for the Olympian and the same front-end loading for the Olympian compared to back-end for David.  Helen has a little wobble on the recovery on her port side where the dots diverge (may be rigged too low?) but the power phase consistency of dot overlay is impressive. 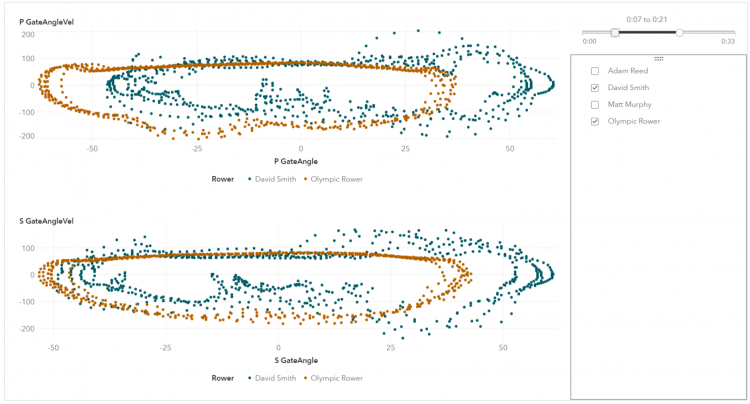 If I were coaching David I would get him to row with less power and focus on consistency – maybe adding straws to mark his catch entry reach and also figure out how to stop him flailing around less at the finish – why does his plot go above the power horizontal line that Helen Glover lays down?  This is were actually watching the athlete gives more coaching insight than the data alone. I wouldn’t want to guess what he is doing with the handles / gates just from this graph.

The RP3 software has in-built analysis based on the interface which receives a signal from 4 magnets embedded in the flywheel – each time one passes over the Hall Sensor, it sends a pulse to the software and from this your force curve can be interpreted by the RP3 Rowing App.

The principles are similar, but cheaper and more accessible than the instrumented force gates used above.  The app is a free download in the google play store.  Here is how to understand power curves.

I got some of my rowers onto the [RP3] machine this weekend. The data you can get from it is amazing!
I think the club having at least one machine would really help improve people’s efficiency and effectiveness.

Posted on August 9, 2018October 16, 2020 by Rebecca Caroe
Alan Oldham is the journalist commissioned to write an article by Rowing News on data in rowing called… read more 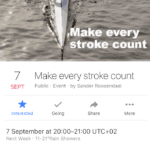 Posted on August 31, 2018October 15, 2020 by Rebecca Caroe
The generosity of experts in rowing never fails to amaze me.  Sander Roosendaal has offered to host a… read more 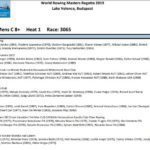 Calculation of training times in rowing

Posted on July 23, 2020October 13, 2020 by Tom Wall
Our training on the water has become more intensive. Unfortunately we have very different current conditions on the… read more