We wrote about the Wall Street Journal Future Leaders Foundation – ‘The Business of Rowing ’ seminar on 03 April 2010.  Thanks to Pauline Bird of TSS who kindly allowed us to publish her notes from the event.

The Wall Street Journal Europe hosted a Future Leader Foundation seminar at London Rowing Club on Boat Race Day, 3 April 2010. The speakers had a common background in the Boat Race, either as direct participants or by participating indirectly (ethnographer Mark de Rond, who studied the Cambridge squad and crews in 2005).

Mark de Rond’s specialist area of study is high performance teams in a variety of contexts (he is currently studying a group of surgeons bound for duty in Afghanistan). His conclusions can be applied to other teams in high pressure environments (most obviously, for example, the financial services industry, where a competitive environment is fostered). He lived with the Cambridge squad for the 6 months of their Boat Race preparation from the initial trials where the squad numbered over 100 hopefuls to the final 20 (two eights and a spare pair). Perhaps his most useful take-away was the observation that ‘what makes (the oarsmen) so difficult is what makes them good’.

A high performance athlete is likely to require careful handling – he (and probably she) is likely to be unusually suspicious of his coaches and their motivations on occasion (e.g. during seat racing), and untrusting of his colleagues (at the worst) although they develop friendships with their team mates and are conflicted by their exceptional loyalty to them. They find themselves in vicious competition with their friends, and (knowing all of their friends’ weaknesses and insecurities) wish to take advantage of them, and yet feel guilty when they do so. Mark’s book (‘The Last Amateurs ’) was included in the ‘goody bag’ provided by the organisers, and is recommended as an interesting and informative read.

Conflicting loyalties were also extensively dealt with in David and James Livingston’s presentation on their experiences as brothers racing against each other in the Boat Race. The impact on their relationship and other family members was plainly very significant. For those not directly involved in the Boat Race (or attending, or an alumnus of the two universities) it can be quite difficult to understand the level of animosity involved in this race, although the impact of that animosity on the Livingston family has plainly taken some time and a good deal of work to overcome. One of the more interesting aspects was David’s feeling of being over-shadowed by James throughout his whole life (as the younger brother), which led to his decision to study at Oxford rather than following the family tradition of attending Cambridge. The Livingston’s book was also included in the ‘goody bag’, which was also an excellent read.

Other presenters were Graham Smith, Mike Blomquist and Artour Samsonov. Graham Smith gave an excellent potted history of the Boat Race and all speakers dealt with the qualities needed by crew members that are transferable to the business environment, not the least being an ability to soak up a punishing schedule, and the persistence to continue soaking it up in the face of adversity.

Posted on March 26, 2018May 20, 2021 by Rebecca Caroe
Review of Ergometer Testing for Rowers on the Toes to the Edge blog – we’ve selected the most… read more 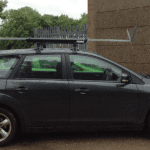 Scull roof racks for your car

Posted on May 30, 2018November 2, 2020 by Rebecca Caroe
Rowperfect is pleased to introduce car carry racks for single sculls as an addition to our range. read more