The Steve Fairbairn digital republications can be found on Amazon for Kindle Devices or for most other devices as a PDF here. They are currently 50% off as a special introductory offer which will run until the 28th of November.

A With Peter Mallory 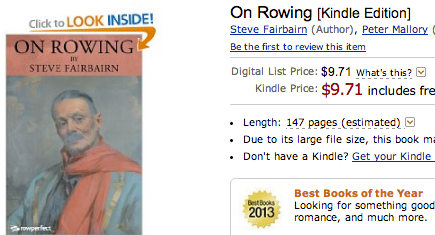 Rowperfect: Peter, tell us a little about yourself.  How did you get into rowing?

Rowperfect:  What are your greatest achievements as a rower and as a coach?

Peter:  I’ve had some good results, four Canadian Henley Gold Medals in three days in 1966, setting a course record at the Head of the Charles that stood for ten years, then 50 national championships and six national team appointments as a coach . . . but, truthfully, my greatest achievement was that I didn’t have a greatest achievement.

What I mean is that I never quite made it to the top, never was absolutely the best, and so I stayed hungry, kept at it, 56 years now.  If I had been a more gifted athlete, I probably wouldn’t be talking to you today.

Rowperfect:  When did you first discover Steve Fairbairn?

Peter:  The very first day I began the research for my four-volume history, The Sport of Rowing, U.S. Women’s Coach Tom Terhaar told me he still picked up his copy of Fairbairn on Rowing and it always made him smile.  I thought to myself, “I have to get a copy of this book!”

Rowperfect:  What about Steve made you want to undertake this project to bring him to a new century of rowers and coaches?

Peter:  The first time I actually read Steve I was completely enchanted that someone actually cared about rowing as much as I did.  To describe his enthusiasm as infectious doesn’t begin to do him justice.

And he is FUNNY, mostly unintentional, by the way.  He is dismissive of his critics in ways that crack me up every single time.  Even if I might disagree with one specific point or another, the fact that he is describing it with so much passion just gets me completely caught up in the discussion, even if I have read it a hundred times.  The point is not to agree or disagree.  The point is to think, stretch, ask questions, be open-minded.

Rowperfect:  You’ve previously re-published Fairbairn on Rowing.  What is different in the updated Volume One, and were Volumes Two through Four always something you hoped to do?

Peter:  When we first approached the initial project, I anticipated it to be relatively easy and not take a great deal of my time.  I imagined three volumes and plunged right in.

Well, I was wrong!  The way the first volume came out utterly failed to satisfy our lofty goals, and so we stopped in our tracks and began again.

Here are some of the problems we encountered when we took a really hard second look at the writings of the inimitable Steve Fairbairn:

The original source material: letters, collections of anecdotes, compilations, pamphlets and books, were written over a period of decades and under the supervision of a number of different editors.  They were full of typos and followed a variety of spelling and punctuation conventions . . . and there were more than a few just plain mistakes.  Modern word processing software allowed us to standardize the spelling and punctuation, making choices Steve would have been comfortable with, and some old-fashioned research allowed us to ferret out a number of factual and historical errors, correcting the text when appropriate, otherwise through notes inserted into the text.

By the way, this follows the methodology of the 1951 Edition of Fairbairn on Rowing.  We just took it several significant steps further, completed the job, so to speak.

We took a careful second look at the images from the original sources and from the 1951 compilation.  Modern technology allowed us to reformat them and enhance their clarity.  We could also add images, some of which have only recently come to light.  Much of Volume Three, Steve’s autobiography, takes place in his Australian homeland, which was a wild frontier landscape at the end of the 19th Century.  Antique photos help the 21st Century reader better appreciate the land that spawned Steve Fairbairn.

The project consumed many months of heavy lifting, but by all accounts the result is a highly enjoyable and user-friendly book experience.  Along the way, it also grew to four volumes.

Rowperfect: Who are these books most suitable for, and what’s the main thing readers will take away from the series?

Peter:  Steve had an opinion on EVERYTHING to do with rowing, and he expressed a lot of preferences concerning technique and training, but most of Steve can be boiled down to one basic premise: He was a naturalist!  In his opinion, English coaches had devolved into teaching body mechanics and rigid posture instead of teaching watermanship.  He told his rowers to concentrate on what their blades should be doing and let their bodies naturally take care of themselves.  He believed that the subconscious mind knows better than the conscious mind what it should do in any given situation, and he considered this very important when applied to rowing skills.

This idea was considered heresy in Steve’s time, and the interesting thing is that conventional wisdom among 21st Century coaches closely resembles the beliefs of the coaches that Steve considered his mortal enemies in his own time.  If he could visit us today, he would declare that his message is at least as relevant and important as it was 100-plus years ago.

So who are these books most suited for?  The open-minded among us, that’s who.

Rowperfect:  Steve’s techniques were considered highly controversial in his time.  If he were alive today (and with modern equipment) what changes do you think he would make to today’s elite rowers?

Peter:  Back when he was alive, Steve’s ideas were certainly considered highly controversial . . . by those who disagreed with him!  Those who agreed with him considered him a god.  He was indeed a highly polarizing figure, and he reveled in that.  The polarization he created outlasted him by many decades.

If he were alive today, he would see his principles in use all over the world.  Sure, he would have his opinions, and he would express those opinions loudly, but he could not help but be impressed by how much influence he continues to have in the world of rowing.  The vast majority of contemporary World and Olympic medalists, 90% and more, can trace their approach to rowing straight back to Steve Fairbairn, this despite the fact that many of them are completely unaware of the debt they owe to Steve.

Rowperfect:  What are you working on now?

Peter:  I always wanted to be an artist or an architect, studied art history in college, worked in Florence, Italy, after the 1966 flood.  But I ended up sculpting the lives of rowers instead of blocks of Carrara marble.  I continue to coach today.

But I am also an artist of words . . . or at least an artisan, and I find that writing is one of the most rewarding and productive things I have ever done.  Accordingly, when offered the opportunity to prepare a Kindle 3rd Edition of my 2000 rowing memoir, An Out-of-Boat Experience, I jumped at the chance.  The publishers and I are putting on the final touches, and it will be available before the end of the year.  I’ll keep you posted.

I have completely rewritten every single sentence, made a few corrections, added a whole bunch of new stories, tweaked everything and tripled or quadrupled the number of images.  I have always been immensely proud of this book.  Myriad people have told me it forever changed their attitudes toward rowing and even toward life, and after more than a decade people still tell me they pick up their copy and it brings a smile to their face.

I was often reminded of that while I was working on our Fairbairn project.  In fact, there are a number of parallels between Out-of-Boat and On Rowing.  They both offer passionate alternatives to the orthodoxy of their respective eras.

Now don’t get your pants in a bunch!  I am NOT saying that I am the new Steve Fairbairn, far from it, just that I think of him as a spiritual antecedent, and the ironic thing is that I wrote the 1st Edition of Out-of-Boat long before I came to know Steve and his writings.

And, oh my, the two books couldn’t be more different in format and in tone.  Apples and oranges.

Here’s what a few of my fellow rowing authors have said about the “new and improved” 3rd Edition of An Out-of-Boat Experience:

“This is a lively, eccentric, joyous, warm-hearted romp through the fascinating life story of an outstanding oarsman and coach.”  – Daniel James Brown, author of the runaway bestseller The Boys in the Boat

“Much like the recent Daniel Brown book, The Boys in the Boat, and Olympic Gold Medalist Katherine Grainger’s Dreams Do Come True, Peter Mallory’s An Out-of-Boat Experience can rightfully take its place on the rarefied shelf of good rowing books.” – Brad Alan Lewis, Olympic Champion and author of a host of must-read rowing books beginning with Assault on Lake Casitas

“Peter Mallory’s memoir is unlike any other rowing book ever written. It is an homage to Kurt Vonnegut in its structure, with innumerable references to The Odyssey and a sense of humor that owes much to P.G. Wodehouse and the Three Stooges. 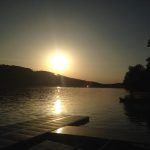 Posted on January 28, 2016October 23, 2020 by James Halpin
Rowperfect has been lucky enough to have been sent some protein samples from Multipower.com. We are looking for… read more