There aren’t many other sports that require such a sharp psychological edge as rowing. It’s 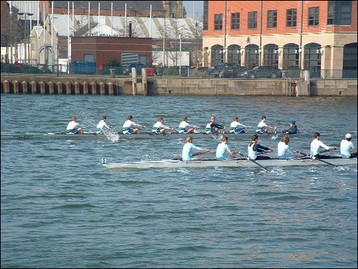 a grueling sport, a competitive, goal-orientated sport than can break even the strongest athletes.

“Rowing for the individual, is more or less, a process of continual warfare between the lower or psychological and the higher and psychological functions; it consists entirely of the maintenance of hard work and the attainment of style by the utmost efforts of attention and will,” according to P.E. Vernon.

Vernon’s work for the Cambridge Psychological Laboratory found that regardless of one’s physiological attributes and “muscular ability,” if an inexperienced oarsman were mentally and emotionally fragile, they would fail in the sport of rowing. His view was that any self-doubt would tend to lead to an athlete succumbing to desperation or tiredness. If anything, Vernon’s work brashly outlined the brutal reality of elite rowing, and how, regardless of whether it was a team pursuit, athletes were at war with their minds more than their bodies.

Regardless of the many techniques coaches employ, rowing is undoubtedly a very mentally tough pursuit that can have rowers wrestling with their emotions throughout training and competition even for novices. One of the reasons is because the sport can become very stressful and its complexities for beginners can be extremely hard to grasp.

Once the complexities have been overcome and the athlete has adapted to their sport, they then have to contend with their rigours of a rower’s hectic schedule. Competitive rowers will train three times a day, and for male rowers, will burn around 7,000-8,000 calories a day. But it’s the demands that training and the psychological as well as physiological strains on the body that can cause even professional rowers to collapse with exhaustion.

Jeremy Moore, a psychological coach at the revered Leander Club, sees willpower and concentration as key attributes for rowers to succeed in the sport. He is tasked with conditioning his athlete’s brains to the scenarios that they may face in the water. He told the Guardian: “If you go into cardiac chaos your brain chooses to close down.” Thus, it’s important for him to ensure that he caters for all possible situations, and provides them with ways to counter problems to overcome them.

Moore feels that the key is to keep calm and that if an athlete has self-belief and experience that there is a better chance they will prevail. His methods don’t just stand for rowing either; the ability to deal with a complex situation can lead the brain to react very differently especially if it hasn’t got any prior experience of the scenario. A study by scientists in the United States showed that amateur poker players tended to rely on emotion and think without logic when faced with high-pressured situations. If this is met with physiological demands too, the likelihood is the mind will succumb to pressure and resort to desperation like Vernon stated in his journal ‘The Psychology of Rowing’. However, if the player is experienced, they tend to “think logically and react without emotion.”

Planning for every eventuality is a common psychological training method employed by all top coaches, not just Moore. But with Leander’s record of producing Olympians like Sir Steve Redgrave and Sir Matthew Pincent, the club has educated their athletes well in preparation and mental toughness over the years. This psychological preparation, albeit slightly more refined now, has become a huge part of the sport of rowing. Which, in turn, has turned elite rowing into the survival of the fittest both mentally and physically.

Posted on February 8, 2018September 30, 2020 by StrengthCoachWill
This article is Part 4 of the Rowing Injury Prevention Series. This series of articles will take us right up to… read more