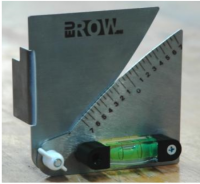 Here's what he had to say about it

Many thanks for the pitch meter which arrived today (well wrapped).It seems very well made.

It will be very useful as I am helping to coach a sculler with a strokeside blade which is diving, and I need to eliminate possibilities like the pitch of the gate. As a former sculler myself, I never received any technical coaching, which became a real handicap the further I progressed. In sculling everything gets magnified, and where it is easy to overcome weight and rigging problems in an eight, if you are roughly correct, there is no escape in a scull over 2000m. ( I represented Scotland in an eight but would have liked sculls far better).

Pitch Gauge for sweep and sculling in the Rowperfect shop

Pitchmeter for carbon tubular riggers designed to sit around the C-Cup and do fore/aft and lateral pitch simultaneously.

Which rowing style do you use?

Posted on February 28, 2018October 14, 2020 by Rebecca Caroe
Image via Wikipedia There are many ways to effectively move a rowing or sculling boat – but knowing… read more

How (not) to demonstrate rowing technique

Posted on October 31, 2018May 21, 2021 by Rebecca Caroe
Lubo Kisiov formerly of Thames Rowing Club uploaded demonstrating in this video how to row.[23/04/14 amendment] This video is rowing… read more

7 Steps To Being A Better Rigger

Posted on June 28, 2017October 14, 2020 by Tobi
The Rig Up Your Life email series brings you 7 key lessons to get you rigging rowing boats,… read more