Chris de Guingand initially met Paddy Davison and his wife Jules on a cruise between St Petersburg and Moscow. They struck up a warm friendship and in September 2010 when Chris and Margaret celebrated 50 years of marriage, Paddy and Jules joined some Hawthorn Rowing Club members in Tuscany to mark the occasion. Prior arrangements had been made to row on the Arno River in Florence and it was anticipated that Paddy would steer the HRC lads in a four. Paddy took himself to Bristol City Rowing Club about six weeks prior to the proposed Arno outing and asked if they could teach him the skills of a coxswain.

The club welcomed him with open arms, did a magnificent job and within days he was steering a novice eight through the narrow Bristol bridges in the dark!  Paddy had absolutely no previous rowing background. He is a retired veterinarian who, when not flying his own aircraft in Africa, has been a steeple-chase jockey, captain of the Army Cresta team on the fearsome St Moritz toboggan run, a salmon fisherman and Master of the Queen’s Horse.

[Aside… this was what Paddy said about coaching ….

No one seems to coach the coxes.  I’ve been to three training sessions and they all concentrated mainly on Health and Safety, Responsibilities of the cox and similar administrative basics.  No one tells you what to say, when to say it, or how to say it.  The coach we have only ever bawls me out for minor indiscretions.   So, because I’m retired and have sufficient funds, I have bought all the coxing manuals and aids.

In my short rowing career I’ve had some adventures; steered our No 1 ladies eight into the river bank in my first head race;  capsized a 4+ (coach’s fault) into the river (5 degrees C, pitch black, 5 km from the boathouse), got a voucher for a sports bra! Asked the stroke (in all innocence I promise) to open her legs so that I could see what was going on down there when the stroke rate meter stopped working, but mainly had loads of fun and satisfaction.  Let’s face it what man in his seventies gets the chance to go out with eight young ladies twice a week!  I love it.]

“The General, the Doctor and the Vet on the Avon in Bristol” 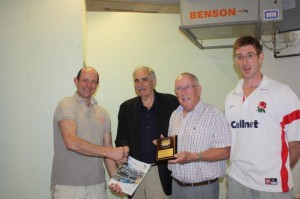 We enjoyed some great outings with excellent steering and not to be denied Paddy had his first ever row in a double with Neil Courtney. On his return to Bristol, Paddy resumed his career as a cox.  By the time the General and the Doc arrived at Bristol in August 2011, Paddy was well established in the rowing club usually looking after crews on two or three days a week.  He was able to organise a boat for the two HRC lads with himself steering. There is no doubt that The City of Bristol Rowing Club has gained an absolute gem in Paddy whose enthusiasm for the sport is boundless – he was keen to pick the brains of the HRC visitors for coaching tips etc. It was great to see a septuagenarian take to rowing with such passion and we hope to see Paddy in Melbourne sometime in the future, perhaps with a Bristol eight for the Head of the Yarra. 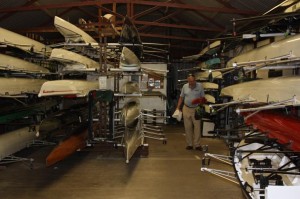 Posted on January 24, 2009October 22, 2020 by Rebecca Caroe
Morning all. I'm at Staverton Park, Daventry at the annual coaching conference and exhibition. Rowperfect is showing off… read more

Rigging for people of different heights and widths, Part 1

6 Great Apps for All Your Rowing Needs

Posted on June 11, 2018October 13, 2020 by James Cameron
There are so many different apps available today that there seems to be one for your every want… read more