It’s Finals Time! Fill your lungs!
Start List: Romania, USA, Great Britain, Australia, New Zealand, Germany
This could be the first gold for TeamGB and GB Women’s Rowing. The crowd know it and go wild at the call over!  GB take two feet in five strokes. Germany in second but it’s level across the lake for the rest. It’s a length for GB at 300m and the crowd are loving it. It’s risky but could work with the home crowd advantage in the last 750m. New Zealand move to second and have half a length ahead of the rest. Germany third. GB look smooth and effortless out in front. Their spoons fly through the water. Stanning gets her body over early on the recovery and the boat runs on and on. Length and a half lead at 1000m. New Zealand in second and Germany third. USA fourth. Germany fifth and it’s the Romanians in sixth. GB pull away again. 750m and they have two lengths. GB look like they’re cruising through 500m. They have two and a half lengths. New Zealand a length over Australia and USA who are level but closing. GB still cruising

History has been made. Stanning and Glover wi GB’s first ever Women’s Rowing Gold at the Olympics. Heather Stanning punches the air again and again. Helen Glover waves ecstatically to the home crowd. Amazing!

Posted on August 9, 2008October 22, 2020 by Duncan Holland
Duncan Holland writes; Simon Barnes who writes on sport and nature for the Times is one of my… read more

Posted on October 1, 2013October 22, 2020 by Rebecca Caroe
Rowperfect sponsored the Bradford ARC regatta with a prize OarRATER stopwatch for the winning coach of the J16… read more 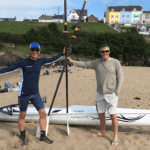 Coastal Rowing – are you ready for something new?

Posted on April 19, 2019October 12, 2020 by Tom Wall
Coastal Rowing – really one of our sport division which has picked up very much during the past… read more