Semifinal 1: Serbia, Netherlands, Australia, Great Britain, Belarus, Italy
The crowd are ready for this one – big GB and Aussie support today. FISA stand is packed with families and friends. The crews start; Australia and Great Britain pulling out a few feet over the field. Australia and first to 250m, leading GB by just less than a canvas. Australia relaxed with the hands around the turn, letting the surge settle before they smoothly move to the catch. They pull out to half a length but both these crews look comfortable. GB lead the Netherlands by a length. Belarus are the ones who currently are out of the final qualifying places. There’s a big fight for third and Belarus lift their rate coming into 1500m. 40spm and closing to three-quarters behind the Dutch. Australia still lead but now only by a canvas as GB lift their rate. GB possibly working harder than the Aussies to move through. It’s close for third with the Netherlands being caught by Belarus and Italy. Italy coming back from nowhere but it’s not enough. GB win in 5:58.26, Australia 5:29.23, Netherlands 6:03.71. Italy just over a second behind and pip Belarus for 4th. Serbia trail these by 2 seconds. GB and Australia give nothing away about their efforts. Both crews sit up and paddle towards the warm-down lake. Eyes forward, looking to the final now.

Semifinal 2: Canada, Romania, USA, Germany, Greece, New Zealand
Quick out the blocks, the Germans lead with USA and Greece level for second. Canada find a faster rhythm and just move through into second as Germany stretch out to almost three-quarters of a length. It’s close for second between three crews. The USA react and move two seats out, closing on Germany. Greece move into third but it’s the Germans who are slipping back. The USA move into first at 1000m and Greece push into second just after the marker. Canada could have a chance here. Romania and New Zealand are close if they can finish fast. It’s New Zealand fighting for it now but they trail Germany by a length with 100m to go. It’s USA (6:01.72) by half a length. Two-thirds of a length back to Greece (6:02.61) with Germany (6:04.61) holding on to third. New Zealand don’t quite have enough sprint and finish in fourth. Canada and Romania fifth and sixth.

Are you strong enough during the drive?

Posted on May 18, 2011October 23, 2020 by Mohit Gianchandani
A guest post from – Carlos D Calendar inares Carlos Dinares wants you to look at these pictures… read more 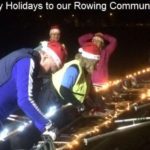 Rowing Humor and Other Christmas Funnies