Early leaders are South Africa in Lane 1 but lightweight rowing is always close racing – this counts for nothing.   At 500m SA and Italy neck and neck with Switzerland just third.  But by half way Swiss have 2 feet on the others.  Danes move up to 41 strokes a minute at they come into the last 500m and overtake the Italians to take third place.  Italy fight desperately to reclaim distance.   Swiss lead to the line with South Africa second half a length behind and Denmark make the third slot for the semi final.

Australia nudge out to a confident start with Great Britain alongside at 500m gone.  Canvas between first three with Germany third.   Brothers in this race Chambers for GB and Kuehner for Germany (twins). Noticeable style difference in the Australians more upright and the Brits rocking forward more.  Half way and Britain has two feet over Australia and Germany’s black ‘stealth bomber’ boat third back 2/3 length.  250m GB has half a length on Australia nd Germany half a length behind and Cezh a third of a length behind Germany.  On the Line Britain pull out to nearly clear water.

This is a yellow boat race with China and France leading the Netherlands.  French rowing a tandem with middle pair both on bow side.   Wind moving a little more to the side and the middle 1000 seems a bit briskly breezy.   French take the lead back at half way and lead by half a length.  Still France and China in front at last 250 and Poland come up in front of the Netherlands but France has nearly clear water.   Twins in Dutch stern pair.  China gets run down  by Netherlands who come second behind France.

Posted on February 1, 2014October 22, 2020 by Rebecca Caroe
Each month subscribers to the Rowperfect newsletter are included in a free prize draw to win one of… read more

Why do body mobility stretches for rowing?

Posted on January 8, 2018November 2, 2020 by Rebecca Caroe
Half kneeling chops were the video demonstration we published from Greg Spooner last month. But we wanted to… read more 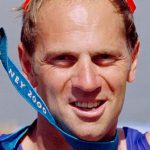 What this Year’s Olympians can Learn from Sir Steve Redgrave

Posted on March 27, 2016October 23, 2020 by Rebecca Caroe
Since 1984, British rowers have won a gold medal at every Olympic Games, and with Britain qualifying for… read more