This is Portugal’s only boat in the Olympic Regatta and they hold onto the leaders in the first 500m. Italy get their bows in front with Canada in 2nd. Through 500m it’s Italy leading, with Portugal moving up on Canada. Portugal continue their move and get half a length up at 750m, stretching out to a length at halfway. Lots of power in the Portuguese boat. They are storming into the second half of the race. The battle is between Canada and Italy for second place, both crews will hope the Portuguese will fade into the finish. At 1500m it’s still Portugal in first by just under a length. Italy are in second with almost a length to Canada. Italy finishing strongly and push past Portugal at 1750m to win by a length. Canada come in third two lengths down on Portugal; they will race the Repechage along with India and Egypt.

GBR are the current World & Olympic Champions and look to silence their critics and worry their opponents, getting their bows in front early. China dropping back quickly off the start. The other three boats are level. At 250m it’s GB by half a length to the Kiwis who in-turn lead Australia by half a length. GB and New Zealand work hard trying to break free of Australia. GB extend their lead by a few feet and New Zealand break clear of Australia at 1000m. GB are back to their smooth style and look comfortable, but with New Zealand still just over half a length down they will be pressing on. Big roars cascading down the course as the boats come into the final 500m. New Zealand look a bit short at the front end as both crews raise the rate into the finish. New Zealand close slightly, their bows level with GB bowman Zac Purchase as they cross the line. GB have put down a big statement. They’re back. New Zealand look like they may have more to give if these crews meet in the final. Lengths of clear water back to Australia, Argentina and China.

Hungary and Greece poke their bows out front off the start but it’s close at 750m with overlaps all less than half a length. Greece can’t break away and are being held by Hungary. Denmark moving through quickly. It’s close all the way as Greece fade and Denmark pull through. Norway and Cuba also coming through towards the finish. It finishes Denmark, Norway, Cuba after Greece and Hungary fail to hang on.

A floating water bottle in Lane 6 delays the start of Heat 4 until it can be cleared by the boat and the water allowed to settle. Big cheer from the crowds as the umpire nets the offending bottle in a single swoop; someone’s been practicing. Germany and France pull ahead early on, with the Germans having an advantage of three-quarters of a length at half way. These two crews have a considerable lead over the rest of the field but continue to attack each other to get the best lane draw in the Semifinal. France just pull through the Germans with 500m to go and move out to a length as the Germans settle for the 2nd place into the Semifinals. Germany down to 28-30 rate, still with three lengths over Japan. France drop their rate in the last 100m to win by 3 lengths to Germany who paddle over to claim the other place in the Seminfinals. 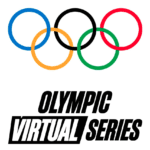 The Olympic Virtual Series – Rowing Event has started! Sign in!

Posted on June 4, 2021June 4, 2021 by Patrick
We reported before about the Olympic Virtual Series Rowing Event before. It’s online and incredibly easy to participate!… read more