Mens 8 Final: Netherlands, Great Britain, USA, Germany Canada, Australia.   Germany press out to a few feet lead over Britain at 500m.  Germany take a canvas as their boat moves so beautifully – horizontal drive of the bows surging forwards.   Britain looking composed as the Canadians start to drop back from third place wit the Netherlands in lane 1 pushing past staving to get closer to the leaders.  Britain still in second place at half way.  German cox glances sideways to the Brits and  the lane 2 crew push forward and are surging their bows past the Germans as they go into the last third of the race.  Germany push back and the Canadians are still up there.  At 1500 m it’s neck dn neck with Canada third and Australia fourth with USA 5th.  Hill is asking the question and the crew are starting to take put eh wrate and Germany are pushing hard and take back the lead out to half a length. The Canadians sprint  German in a class of their own out in front, Canada get the silver for Mike Spraklen of Marlow, UK and Britain slip back into bronze in the last hundred meters.

Posted on April 26, 2012October 28, 2020 by Rebecca Caroe
James O’Connor – Rowing for Harvard as a foreign student James comes from a very rowing-influenced family. With… read more 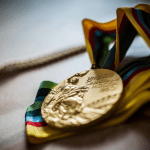 Posted on June 11, 2018October 27, 2020 by Rebecca Caroe
Should we give medals to coaches as well as athletes? Rachel Hooper gives her view (first published here)… read more

Your rowing season review – how did you do?

Posted on October 2, 2018October 29, 2020 by Rebecca Caroe
Here are 7 key questions for you to diagnose yourself and your rowing.  Most people lose sight of… read more