Russians lead from the start with Estonia alongside and French coming third.  Italians wind down and nearly stop 150 m from the line.

And they’re off – All four in a line with a canvas to Croatia at 500m.  Australia drops off the page and NZ aren’t quite up with the Poles in second.  Croatians make their 36 rating look easy – great acceleration in their power.  Last 500m and the Aussies pusb on and NZ sprint too trying not to get caught.  Croatia continue to lead – but the third place is where the race is.  Croatia and Poland one and two;  Australia third.

Germany take a confident start and are half a length up on Ukraine at 500m gone with Great Britain  half a length behind.  The wind is resigning so the middle of the course looks a bit frisky.   It’s more a direct tail wind now.  Germany showing the rest how it should be one as they glide out to a two length lead.  Overhead camera shot is fabulous – parallels of the wave fronts with the oar parallels moving one the top.  Britain second and the Ukraine and Switzerland fighting for third. 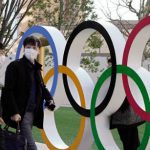 Coronavirus and Rowing: How our sport is affected

Posted on March 18, 2020October 14, 2020 by Bryan
Coronavirus and Rowing: How the corona virus affects us rowers Almost daily we receive new information about the… read more

Posted on August 30, 2016October 21, 2020 by Rebecca Caroe
Now that the dust has well and truly settled after an enthralling Olympic Games, I thought it was… read more