Howard Aiken has written a few times for us. Here is his technical and interesting post from a while ago.

Most club rowers, quite rightly, will work with whatever equipment they are given, so we sometimes miss the subtleties of design in that equipment.  Take a modern sweep-oar for example. It is actually a highly-engineered precision instrument designed maximise the efficient transfer of mechanical energy from rower to boat, so to get the best out of them it helps if you understand its characteristics. 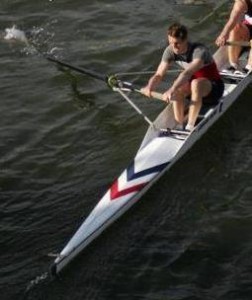 In mechanical terms, each oar or blade on a moving boat is a second class lever with the fulcrum (centre of rotation) near the tip of the spoon.  However, while it is correctly described as a lever, a blade is not rigid. It is designed with a carefully calculated degree of flexibility.

From the rower’s point of view the importance of this flexibility is its relationship to the effort (energy) the rower is applying to the blade.  At the start of a stroke (the catch) the blade is subject to a bending force as the rower pulls the handle toward the bows.  The spoon remains almost stationary in the water, moving the boat forward by means of the force which is transferred to the boat at the pin.  As the blade bends it is in effect storing energy which will be released again as the blade unbends.  So the important question is – when does the blade unbend? There are only two options:

Option 1. The blade unbends as the spoon lifts out of the water.  In this situation the rower is pulling hard on the blade as her outside hand moves downward to extract the blade.  There is still pressure on the front face of the spoon as it leaves the water.  At its worst this is referred to as “washing out”, where the spoon doesn’t actually stay in the water for the full length of the drive phase but moves up and out of the water, creating a telltale “wash” of foam as it leaves the surface, rather than the puddle we should expect. In less severe cases it still produces a splash at the extraction – a sure sign that energy is being wasted in throwing water into the air rather than moving the boat.

Option 2. The blade unbends in the water.  In this situation the rower has slightly eased off the pressure on the handle at the finish.  As the blade unbends, the energy stored within it is transferred to the boat as forward motion. There will be little or no splash at the end of the stroke as the blade is extracted from the water because there is no pressure left on the front of the spoon to throw water into the air.

In practice there is only a small fraction of a second’s difference between option 1 and option 2, but that small fraction of a second can deliver a significant improvement in efficiency. Leaving the spoon in the river for that extra moment allows the rower to convert the energy stored in the blade into additional forward motion.  Over the duration of a race, that additional motion could be the difference between winning and losing.  In my experience, once rowers learn to think of the blade as a spring rather than a stick and to look critically at their extraction technique for signs of splash or wash, they can significantly improve the efficiency of their stroke, getting a little more boat speed for a little less effort by making better use of the flexibility that the designers of modern blades have gone to so much trouble to provide.

Incidentally, all of the above also applies to sculling, although being shorter in length, most sculling blades will not bend as visibly as a sweep blade during the stroke.

Here is another explanation we found at the Braca Sports website

The key performance factor of BRAČA-SPORT® oar is the revolutionary “Mechanical Energy” concept – is the shafts ability to store elastic potential energy during the first part of drive and release it during and after the midrange in the controlled mode, enabling the maximum velocity of boat.

Should you tie a bowball down when 1x is on roof rack?

Posted on February 23, 2017November 2, 2020 by Rebecca Caroe
Do you know of any good guidelines for carrying sculling boats on the roof of cars with/ without… read more

What colour rowing boat would you choose?

Posted on February 2, 2017September 30, 2020 by Rebecca Caroe
I am about to launch a new rowing boat and we are trying to decide what colours to… read more

Posted on December 4, 2006October 23, 2020 by Rebecca Caroe
Finally, an honest and non-kneejerk reaction to the supposed safety issues regarding the MK1 oarlocks. Led by Carl… read more